The star of ‘The Big Bang Theory’ is joined by actors Elizabeth Henstridge and Tom Rhys Harries to discuss their new series, which premieres February 4th on Apple TV+. 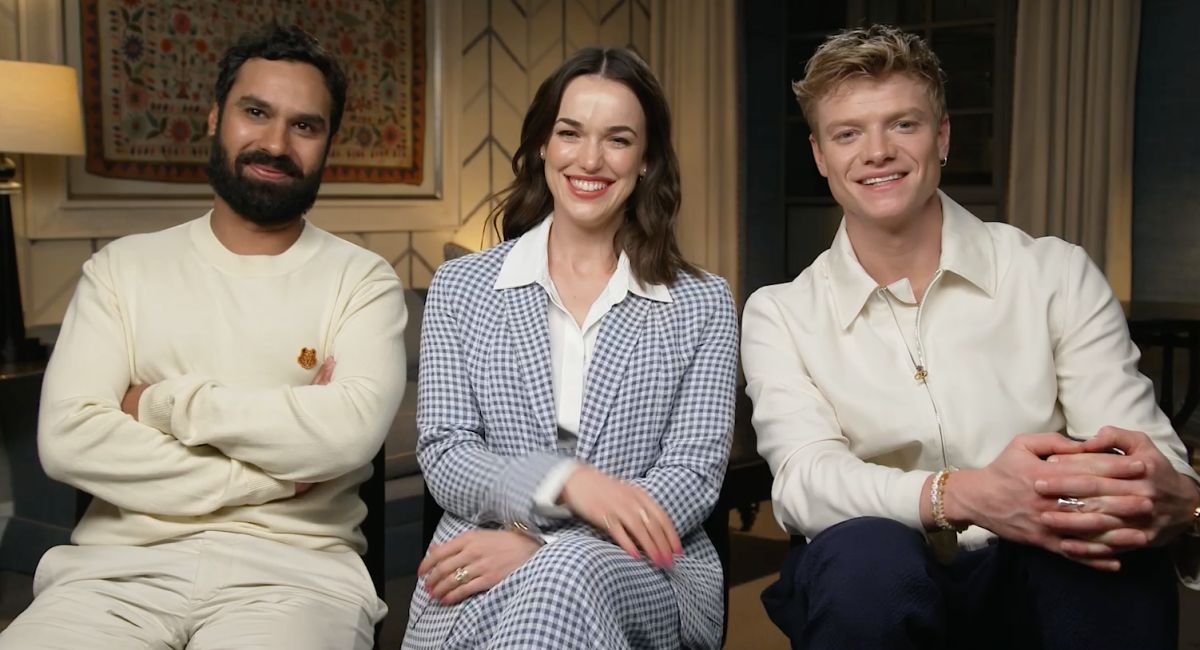 Premiering February 4th on Apple TV+ is the new series ‘Suspicion,’ which is based on the Israeli series, ‘False Flag.’ The series follows five people whose lives are turned upside down after London police identify them as suspects in the kidnapping and disappearance of an American media mogul’s son.

Moviefone recently had the opportunity to speak with actors Kunal Nayyar, Elizabeth Henstridge, Tom Rhys Harries, and Noah Emmerich about their work on ‘Suspicion.’

You can read the full transcript of our interview with Kunal Nayyar, Elizabeth Henstridge, and Tom Rhys Harries below, or watch all the interviews in the video played above.

Moviefone: To begin with, Elizabeth, can you talk about the incident that brings these five strangers together in the series?

Elizabeth Henstridge: Well, I was in this show called 'Suspicion,' where Uma Thurman plays a corporate PR strategist. She's a very powerful woman who has just been named US ambassador to the UK. Her son has been kidnapped. We play British citizens that happen to be in New York on the day that Leo was kidnapped. Then we are accused of this crime, or at least suspects of this crime.

So we kind of follow how that unfolds for Uma Thurman's character, Catherine Newman. You see the impact it has on our lives and the lengths that you go to, to try to clear your name and how difficult that is when the truth is being blasted all over social media, which might not be your truth. It's hard to know who to believe in and what is the truth.

MF: Kunal, the show deals with the theme of trust. Can you talk about the level of trust between these five strangers when they first meet?

Kunal Nayyar: It's difficult, again, to speak about these things without giving spoilers away. But obviously as you see these characters and the journey that they're on, I think that the level of trust switches, it's not so black and white. I think it's a gray area. I think all we know is that they need each other.

They definitely need each other to accomplish whatever it is that they're trying to accomplish, whether it's clearing their name or actually trying to get the job done, we don't necessarily know. So I think the level of trust shifts every episode, and I think for the audience perception, it'll be impossible for them to tell who trusts who, who's done what, and who's responsible for the end game.

MF: The series also deals with the themes of technology and surveillance, and how we deal with them in our modern society. Tom, can you talk about how those themes affect these five strangers?

Tom Rhys Harries: Well, yeah. The surveillance and the social media and our digital footprint paper trail, it's become sort of so interwoven with how we lead our day-to-day lives and very quickly. If you'd have told someone 20 years ago that most of us would be kicking about with a piece of tech that's worth however much it's worth in your pocket, I think people wouldn't have believed it. Also, the amount of information that we have access to. That comes with really difficult questions that we have to ask as a society.

I think it's important for us to be asking these big questions, particularly for a younger generation, because I don't think we've quite cracked it yet on how to manage surveillance, the ethical issues and moral issues of all of that. I think what I really dig about the show is that it's asking a lot of big questions about these very current themes that are prevalent in society and it feels very timely. That this show is coming out when it is coming up.

MF: Another theme in the series is truth. Kunal, can you talk about that and how your character really learns the truth about himself?

KN: Look, it's a very good question, really. I think you have to be lost to be able to be found, and I think that's what we see in this character. He's definitely lost and because he's lost, he finds purpose in something that you don't know if it's good, you don't know if it's bad, and that's the beauty of this show.

MF: Elizabeth, ‘Suspicion’ could easily have been done as a movie, but it would have had to be condensed for time. What has it been like for you to do it as a series and have more time to develop your characters?

EH: Oh, it's brilliant. I love TV for that reason. That you can explore big themes and then also things where you can discover so much about your character. Aadesh faces the truth or finds the truth out as we go, but as an actor that's just such a gift to be given all that time with his character and to go through such extreme circumstances.

I think it suits itself perfect to a mini-series in that we'd lose so much at being a movie, but then with it being eight episodes, it's a very intense week in these people's lives. I think that it keeps the suspense and it keeps the pace and, hopefully week-to-week, people are going to be shocked.

KN: That's why we were talking about how much we love the fact that it's a show like this. A show like this, it's perfect that it's coming out one week (at a time). I mean, except for the initial two episodes. I think that is going to really lend to the stakes.