Female Filmmakers in Focus (TIFF Edition): ‘You Are Not My Mother’ Director Kate Dolan on Her New Horror Film 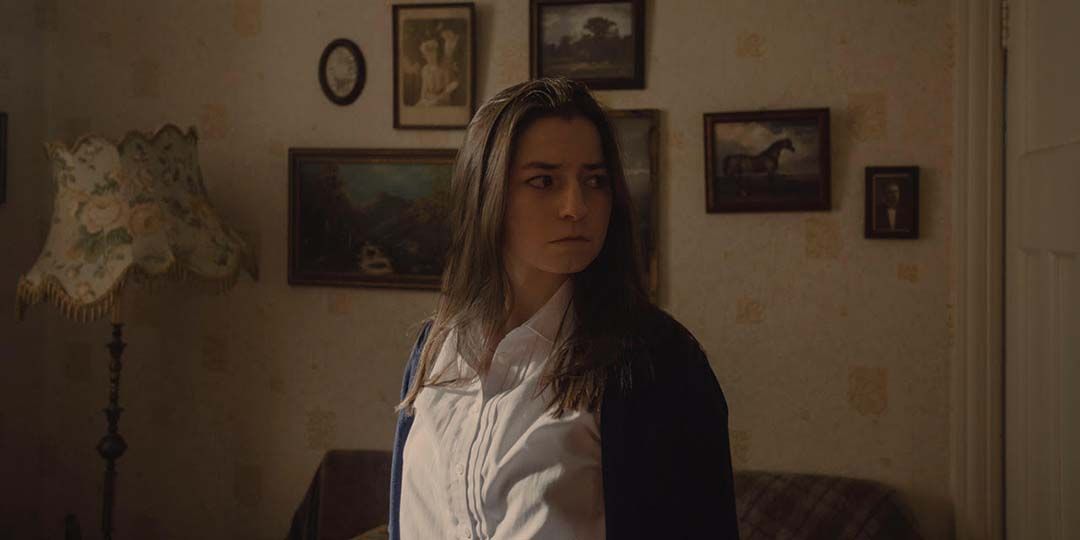 Hazel Doupe in 'You Are Not My Mother,' written and directed by Kate Dolan

With ‘You Are Not My Mother’, Irish born writer-director Kate Dolan brings the rich history of Irish folklore to the world of cinematic folk horror, crafting a striking debut feature film that will linger in the minds of viewers long after the images fade to black. Set a week before Halloween, the film follows misfit Angela (Hazel Doupe) whose mother Char (Carolyn Bracken) disappears without a trace, only to return the next day acting like a completely different person. To save her mother, Angela must confront her family’s past and learn to embrace her roots.

A graduate of the National Film School at IADT, Nolan cut her teeth making short films, including the acclaimed satirical horror short ‘Catcalls’. She sat down with Moviefone ahead of the Midnight Madness presentation of ‘You Are Not My Mother’ at the Toronto International Film Festival.

Moviefone: How did you first come up with the idea for this film?

Kate Dolan: I suppose it’s from a couple of different places. Mostly from Irish folk tales and myths and legends from Irish folklore. We have a lot of dark fairy tales. The main source of which is fairies, which are bad fairies - not like the Tinkerbell-esque that you see in Disney movies. They’re very dark creatures, and come in a lot of forms and have different mischievous motives. So there are a lot of stories about them taking people and replacing people. There is a recurring mythology in Irish folklore about the changeling, which is also in other European folklore, but in Ireland essentially it is that your child or someone is swapped for a fairy person and their goal is just to wreak havoc and enjoy themselves in the process. That was the start of it. There are true stories in Ireland as well, born from folklore, where people would think their relatives or children were changelings and then burn them in a fire. Which is really dark. The last recorded case of that was I think 1895. It was a story of a man who murdered his wife because he thought she was a changeling, but really she had the flu. She was a very independent woman, and this was like her third or fourth husband, so I think people may have disliked her for that as well.

MF: Fire can be both destructive and cleansing in many cultures. Could you discuss how you use it in the film?

Dolan: In the folklore stories, fire is often seen as a way to purge. Almost every different Pagan holiday that marks different times of the year that we have in Ireland will involve a bonfire or fire in some way. Particularly Samhain, which is our Halloween. Even nowadays on Halloween a lot of communities will light bonfires. It’s this element of our tradition that has stayed in the communities, that Catholicism couldn't knock out of us just yet. I think the film uses a lot of elemental symbols, like water and fire. Fire and air are like light and life, and fighting for your life. Water and the earth draw you down and are a bit of a darker space.

MF: I thought your use of mirrors was also very interesting, especially when the mother is in a mosaic mirror.

Dolan: You know those things that happen by a fluke sometimes? We went to that location, and it was just a completely empty house that we needed to shoot that one bathroom scene in. It was when we were doing pickups, actually. The mirror was just on the wall, but it was the only piece of furniture that was left in the house. It was completely desolate apart from that. I thought the mirror was so cool, the way you could get all these reflections. We use a lot of mirrors because the duality of the mother’s personality is this other her, and it’s represented through that.

Dolan: Yeah, I personally was raised by my mum and my grandmother, and we lived with my granny and grandad growing up, and then my grandad died when I was 15. In Ireland, I knew a lot of my friends had similar family situations, with three generations of women. I had two very strong, matriarch grandmothers who were very outspoken and independent, and really strong examples for me growing up. I wanted to represent that in an Irish film because in Ireland, particularly in the folk tales, but also in Irish history women are extremely disenfranchised. We only got our abortion rights in 2018. So there is a history of women having tragic stories in Irish history and in folklore, so I wanted to have three characters who were complex and nuanced and have a dark side, but also a light. That they were three-dimensional women and have these complicated relationships with each other, but are very strong, and you can see they will have their happy ending in a way.

MF: Can you talk about the significance of the ball of twigs and leaves “for protection”?

Dolan: I did a lot of reading about different Pagan rituals, and read a lot of books about witchcraft while I was writing the script. The ball is the idea of a protective talisman. There are a lot of different traditions and ways you can go. It was hard to narrow it down, so it is an amalgamation of different elements of Paganism, but also of modern witchcraft. There is a modernity mixed with the traditionalism in the film. So it’s not necessarily a real thing, I made it up.

MF: Can you talk about casting the film? Carolyn Bracken has a very demanding role.

Dolan: We had this small budget. It was made with Screen Ireland, so it was almost a microbudget. It was €400,000. So we were a little bit limited in terms of finding actresses of that age bracket who could play that role, and who would do this little film. I was sent some casting tapes and Carolyn was in those tapes. Something really drew me to her. She really understood the struggle of the character before she becomes this other character. Whenever I spoke to her over Zoom, because it was during COVID, it was apparent that she really got it. We brought her in with a couple of other actresses for a chemistry test with Hazel Doupe, who plays her daughter in the movie. She really got it, and she was unafraid of what she had to do. We had this demanding dance scene, and she was really excited about trying it. She had never really done anything like that before, but she was just the kind of person who will just throw herself into it, which is really exciting as a director to find someone like that. That dance scene she does, she kind of made that up herself with this music that the composer had done. I sent her some references of what I wanted it to be like, and she just threw herself into it and didn’t hold back at all.

MF: Was Hazel Doupe as Char the first person you cast?

Dolan: Yeah. I had seen Hazel in a short film. Char is a character with a lot of internal performance, she doesn’t speak out loud her feelings, so you need someone who can emote that. So I had seen Hazel in a short film where she had a character who was similar in that way, and I felt she would be perfect. She is really into Wiccan and Paganism and stuff, so when she read the script, she really wanted to do the movie. She was reading our Tarot cards on set, which was fun.

MF: What were you looking for in terms of the village, and how did you choose where to film?

Dolan: I’m from some of the areas that are in the film, sort of north Dublin. It’s suburban, but very close to the city so it feels quite urban a lot of the time. I felt like in folk horror that I had seen and Irish folk stories, it was always like they move to a cottage in a rural forest and then they anger the things in the woods. Having grown up just outside the city, I found that my family were all really superstitious and always told these stories, but we’d be in a housing estate with a lot of houses around us. I wanted to see a story in that setting. So a lot of the locations were places where I used to walk home from school or where my friend’s house was growing up. It was nice to be in such a familiar setting.

Dolan: For COVID, it was really tricky. We shot during a second lockdown, so right before we shot, a lot of our locations pulled out. So we had to find new ones while we were shooting sometimes, which was quite stressful.

MF: Did you have any specific lenses that you used to capture the haziness of the area?

Dolan: Our D.P. Narayan Van Maele had a set of Cooke S2 lenses, which are a little bit older, so they have a more soft, vintage look to them. We just had those because we didn’t really have the money to be renting anything special. It was just what he had, but it was lucky because his lenses were perfect for the story. The production designer Lauren Kelly did a lot to diffuse the light in a very natural way at a lot of the locations, which added to it as well.

MF: What do you hope viewers take away from the film at the end?

Dolan: Obviously, I want people to enjoy it and feel scared and excited, and have enjoyed their trip to the cinema in that way. But, it’s quite a personal story, so if people connect to it or emotionally react to it in a way that maybe touches something a bit deeper than just seeing a scary movie in the cinema, that would be amazing.

MF: Can you recommend another film directed by a woman for readers to seek out?

Dolan: I went to see Nia DaCosta’s ‘Candyman’ the other day. I really enjoyed that. One of my favorite movies directed by a woman is ‘American Psycho’ by Mary Harron. I think it’s fascinating that a movie made at that time can still have so much to say. It’s still really relevant. It’s quite dark and violent, but also can be very humorous. It was way ahead of its time in a way. It can be enjoyed at any era because there is so much you can draw from it thematically. That’s one of my favorite movies. And ‘Near Dark’ by Kathryn Bigelow. Oh, and ‘Blow The Man Down’ directed by Bridget Savage Cole and Danielle Krudy was one of my favorites last year! I love that movie. A great film that showcases women supporting women.

'You Are Not My Mother' is part of the Midnight Madness series at the Toronto International Film Festival. TIFF's digital screenings of the movie are scheduled on September 13th and 15th.