The ‘Game of Thrones’ prequel is set nearly two hundred years before the stories we’ve seen and follows the brutal jousting for power within the Targaryen family. 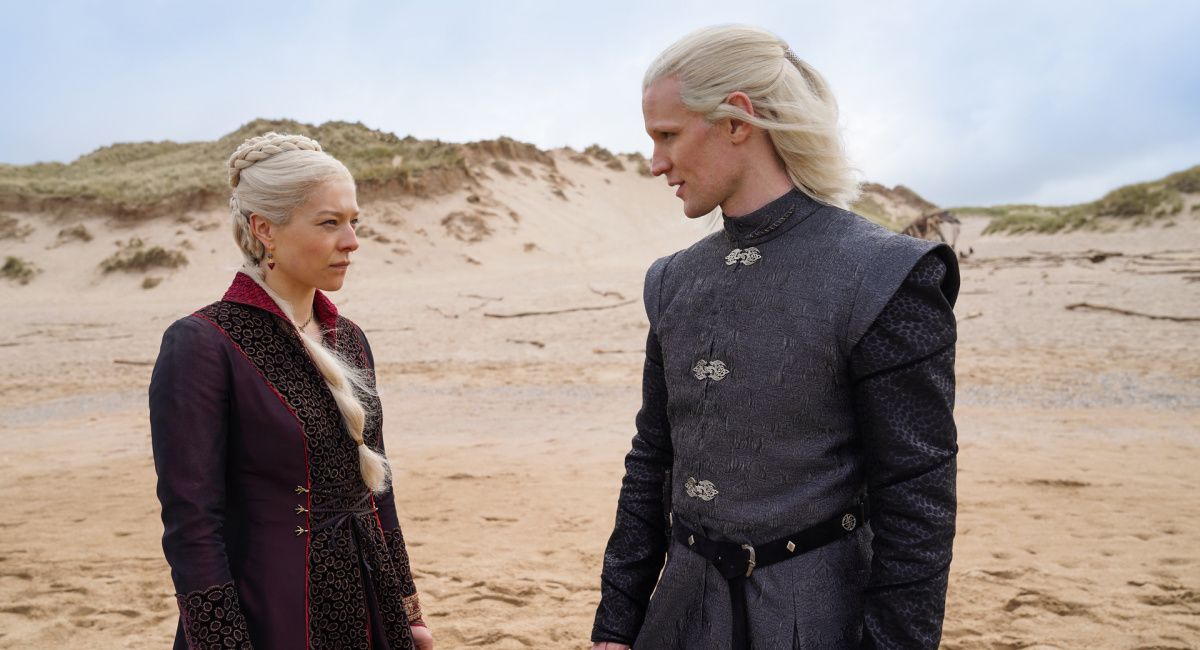 (L to R) Emma D’Arcy as "Princess Rhaenyra Targaryen" and Matt Smith as "Prince Daemon Targaryen" in 'House of the Dragon.' Photograph by Ollie Upton/HBO.

‘House of the Dragon’, which just premiered on HBO and HBO Max, represents an attempt to draw back the ‘Game of Thrones’ faithful to the world of Westeros.

How you respond to that attempt, will likely be impacted by your reaction to the final couple of seasons of the original show. There are those who enjoyed ‘Game of Thrones’ for its entire run, or those who felt it began to stumble as the end drew nearer, the pace ramped up and decisions had to be made that deviated from novelist George R.R. Martin’s books – especially as the show began to outpace the source material.

And then there are those who have sworn never to return, claiming disgust at late-hour plot turns such as Daenerys Targaryen’s (Emilia Clarke)’s torching King’s Landing and various armies in her vengeful quest for power.

This new prequel has something of an uphill batter to reclaim the hearts, minds and eyes of that last group, but for those still open to another round of pass-the-throne, ‘House of the Dragon’ should offer something attractive.

Paddy Considine as King Viserys Targaryen in 'House of the Dragon.' Photograph by Ollie Upton/HBO.

Adapted from Martin’s 2018 tome ‘Fire and Blood’ ‘Dragon’s story is set 170 years before Dany and co. played their own game and kicks off with the crowning of King Viserys Targaryen (Paddy Considine), who become the heir to the throne mostly because in this medieval-based patriarchy, it is the men who rule, while women are mostly seen as royal baby factories, serving to pump out male heirs.

Viserys’ sister, Princess Rhaenys Velaryon (Eve Best), denied her shot at the crown, choose instead to marry into influence with Lord Corlys Velaryon (Steve Toussaint) and births her own male heir who could factor into the story down the line.

Our sovereign, meanwhile, has a daughter, Rhaenyra Targaryen (Milly Alcock), but is desperate for a son, at least until tragedy strikes and he begins to think that perhaps his headstrong, dragon-riding daughter might just be the one to rule them all.

Around this core group orbits any number of other lords, ladies and potential challengers for the king’s seat once he dies. Moving the story forward nine years from its start, we catch up with Rhaenyra and best friend Alicent Hightower (Emily Carey), who is the daughter of the King’s loyal right hand man Otto (Rhys Ifans).

(L to R) Olivia Cooke as Alicent Hightower, Rhys Ifans as Otto Hightower in HBO Max's ‘House of the Dragon.'

And then there’s the monarch’s troublemaking younger brother, Prince Daemon Targaryen (a strutting, scene-stealing Matt Smith), who no-one in the court can quite figure out how to handle. Given control of the city’s watch, he enacts a brutal scouring of criminals, limbs and heads hacked with wild abandon). Yet he’s also fond of the local brothels, throwing parties full of writhing naked people as his troops celebrate.

Oh, and he has a slightly creepy affection for his niece. Mostly, though, he’s lazy one moment ambitious the next, convinced that since he’s currently the main heir, that situation won’t change.

Only the first episode was provided to us, but we do know that the story takes a time jump midway through the first season, as Rhaenyra’s rise to power sees her age up to be played by Emma D’Arcy, while Alicent – moved into her own position of influence at the close of the initial outing – is later played by Olivia Cooke.

But if this episode is anything to go by, ‘Thrones’ fans needn’t worry too much. ‘House of the Dragon’ has some issues, but it also boasts the expansive world-building of its parent series, and the budget to match. While ‘Thrones’ waited a while for the scaly beasts to reach their full potential, ‘Dragon’ lives up to the name with at least two fully grown examples in the opening salvo.

Olivia Cooke as Alicent Hightower in 'House of the Dragon.' Photograph by Ollie Upton/HBO.

The world of George R.R. Martin is a brutal one, and ‘Dragon’ is, like its predecessor, unafraid to dive headlong into quite how brutal that can be. A savage clash on the jousting field is crosscut with the bloody birth of Viserys’ latest child, and the violent procedures inflicted on his wife Aemma Arryn (Sian Brooke). Show-runners Ryan Condal and Miguel Sapochnik (the latter a ‘Thrones’ veteran who also directs here) craft that scene with style and raw intensity.

Unlike the sprawling ‘Thrones’, which would flit between kingdoms and visit various storylines, ‘Dragon’s focus on a few allows you to get up to speed with who everyone is and what they want (spoiler alert: to rule or just survive). Other houses with names familiar to longtime viewers (Baratheon, say, or Stark) are reduced to cameos.

Yet that narrowed focus is also part of the problem with the show as not everyone is quite as compelling as perhaps they might be. It’s no dig on Considine, who ably plays Viserys as a man struggling to be as honorable as possible (one of the show’s themes is how hard that is as a choice when you’re a king in a place such as this), but the ruler does sometimes come across as a bit of a wet blanket.

(L to R) Milly Alcock as Young Rhaenyra, and Emily Carey as Young Alicent in 'House of the Dragon.' Photograph by Ollie Upton/HBO.

There are times you’ll cry out for a Tyrion or Jaime Lannister to give the story a little extra wit or spice. Matt Smith can only do so much, and even he is sometimes burdened with petulant sulking in place of character development. The wigs are something of an issue too – you do catch yourself wondering if they spent all the budget on dragon effects or giant sets and had to run out to the local Spirit Halloween store for some of the less-than-luscious locks.

The limited scope also doesn’t solve the fact that this initial installment has a lot of heavy lifting to do in terms of setting up the plot, which means that aside from one or two of the players here, everyone else gets a quick introduction or check in, coming across more as chess pieces than characters so far.

Still, this is a worthy start for what shows signs of maturing into a great series, once the story really kicks into gear and we learn the nuances of more than just Viserys, Otto, Alicent, Rhaenyra and Daemon.

Fabien Frankel as Ser Criston Cole in 'House of the Dragon.' Photograph by Gary Moyes/HBO.