If you're curious as to what new movie this week might be best for you, Moviefone is here to help you find it and watch it. This week's selection of movies features comedic superheroes, kids in space, a haunted hospital, canine companions, French skiers, and a queer war drama from South Africa. 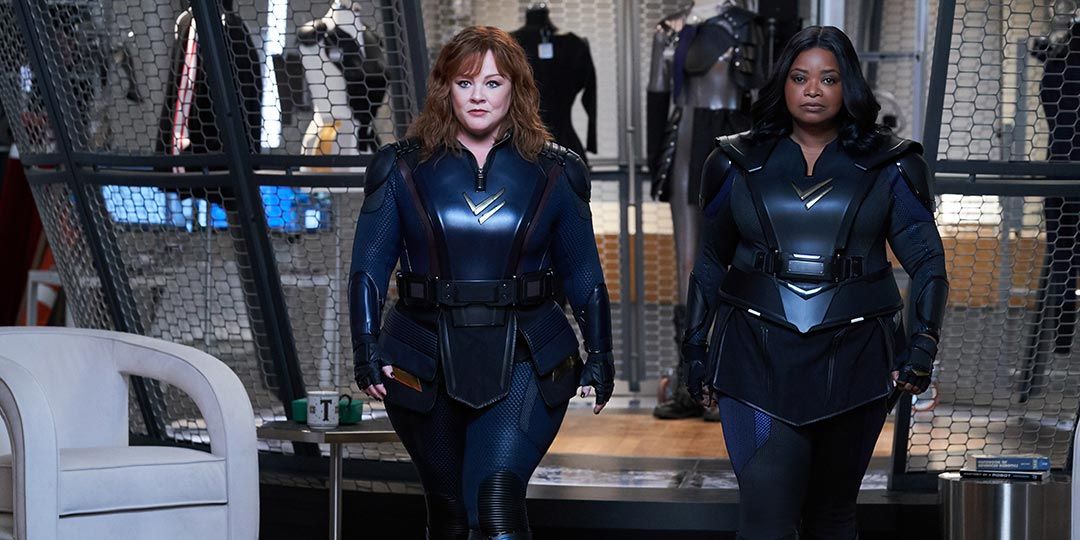 Melissa McCarthy's Lydia and Octavia Spencer's Emily met in school and have been best friends for decades.  Or they used to be, anyway.  Living in a world plagued by super-powered bad guys called known as Miscreants, Emily has spent her life working out how to grant superpowers to those that would fight for justice.  And Lydia found her calling in... heavy equipment.  Emily's brilliantly-derived serum gives Lydia super-strength, and though that strength was meant for Emily herself, she settles for invisibility.  Now with comparable powers to the Miscreants, the two estranged friends form "Thunder Force," and with McCarthy's husband Ben Falcone directing, hilarity ensues.

Watch this if... you're a fan of Melissa McCarthy or Octavia Spencer, or if you think that superhero movies have been taking themselves way too seriously lately. Yes, we're looking at you, Justice League.

One of the biggest challenges facing would-be planetary colonists is how humans could manage to live in an enclosed space to embark one a trip that could last for generations.  The scientists in 'Voyagers' (led by Colin Farrell's Richard) theorize that if the humans in question were born into that enclosed space, then they wouldn't know what they were missing, and would be better suited for the trip.  As the project's genetically engineered kids prepare for departure, Richard decides to join them at the last minute, to guide them as they grow up.  After a few years in space, the now-young-adult colonists start to learn more about their environment, and they begin to question obligations to the colonization program.  The disagreements lead to violent confrontations, and soon the entire crew's very survival is at risk.

Watch this if... you've ever wondered what would happen if beautiful people were raised in a bubble and sent into space, or you want to see Colin Farrell as a father figure.

Rose Williams in 'The Power'

Val (Rose Williams) is a nurse trainee working in a dilapidated hospital in East London in 1974.  That year saw major power outages due to a miners strike, and these historical details set the stage for this ghost story.  Most of the patients in the hospital have been evacuated to other facilities, but Val has to work the night shift, watching over the remaining patients in the parts of the hospital powered by a generator.  Val hasn't told the other staff about her fear of the dark, related to her childhood trauma.  A malevolent force in the hospital senses that fear (like they do), and uses the abuse from Val's past to torment her in the present.

Watch this if... you like scary movies with something to say.

Major, one of the subjects of 'We Don't Deserve Dogs'

Filmmakers Matthew Salleh and Rose Tucker have put together a documentary that examines the relationship between dogs and humans.  By some quirk of evolution, one particular type of canine and one particular type of primate have formed a symbiotic relationship that has lasted for millennia.  This isn't a science lesson, though; Salleh and Tucker focus on quite a few specific examples of relationships between dogs and people, and share the universal similarities in those relationships while also celebrating the differences across cultures.

Watch this if... you love dogs or even just animals in general. Or you need the reminder that there are still good things in the world.

Slalom (In select theaters and VOD)

In her debut feature director Charlène Favier takes on this story of Lyz (Noée Abita),  a 15-year-old skiing star,  and Fred (Jérémie Renier), her coach, and a former champion skier himself.  Fred puts her through a grueling training program, both physical and mental, but Lyz meets those challenges and shows she has the potential to be an elite professional athlete.  Fred's predatory nature becomes more obvious as training continues, and Lyz will need to discover how to get out from under his control.

Watch this if... you enjoy sharp dramas with powerful performances, and you can handle subtitles.

Moffie (In select theaters and VOD)

In 1980s Apartheid South Africa, military service was compulsory for all white boys over the age of 16.  Young Nicolas (Kai Luke Brummer) has to complete his service and support his country against the "black danger," but there's another institutionalized bigotry Nicolas is trying to hide from, in the form of the Army's rampant homophobia.  As Nicolas sees a possible relationship with a fellow recruit, it becomes harder and harder for him to survive the brutal sensibilities of the soldiers around him.

Watch this if... you're open to a powerful story about LGBTQ experiences from other parts of the world.