‘The Pursuit of Love’ writer/director/co-star Emily Mortimer talks about the new limited series. 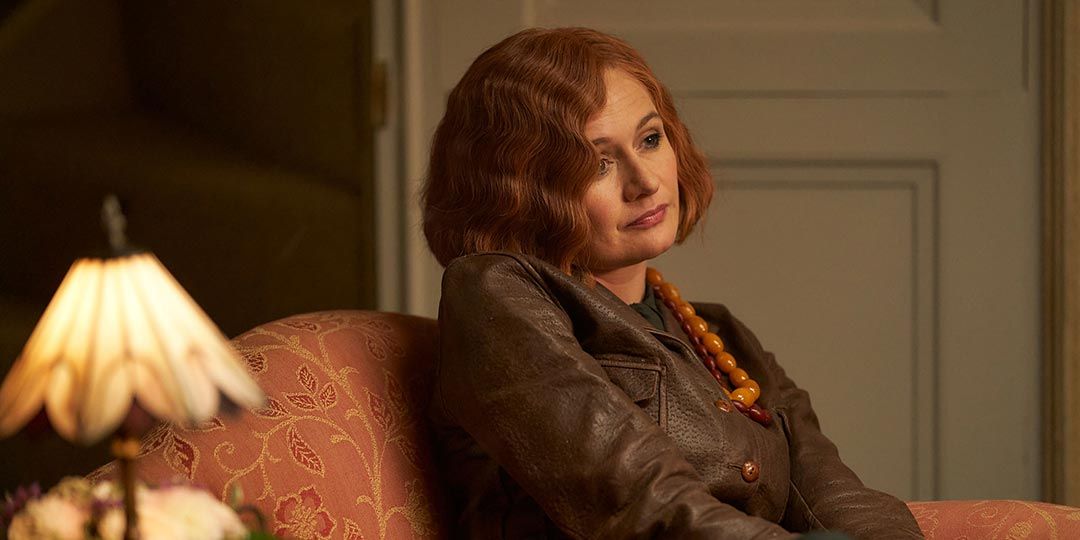 Emily Mortimer, writer, director, and co-star in 'The Pursuit of Love'

Based on the novel by Nancy Mitford, ‘The Pursuit of Love’ tells the story of two upper-class British cousins in the years between the two World Wars. The cousins, Linda and Fanny, are played by Lily James and Emily Beecham, and the series was adapted and directed by Emily Mortimer. Mortimer also co-stars as ‘The Bolter,’ Fanny’s notorious mother, who has a tendency to duck out of any romantic relationship the moment she gets bored. Mortimer recently spoke to us about her new Amazon Prime series.

Moviefone: How did end up both writing and directing this?

Emily Mortimer: So it was sort of a bona fide sort of job offer when I was offered the task of making a pilot on spec for the show by some producers, and they had already Lily James attached, and I had read the book as a teenager. I hadn't read it since, but I loved it. I remember loving it. I thought to myself, do I really want to add another sort of costume drama with people in costumes in a sort of big house in England to the world? But then I read it again, and I thought, no, this is a story that deserves to be told. I felt like there was something very fresh and original and amazing about the tone and about Nancy Mitford's voice. And so I set about writing it, and it got commissioned, and the BBC pitched up and then Amazon came on.

And then we had to find a director and I hadn't thought about directing it, although I realized retrospectively that I had been very bossy in my stage directions about sort of where the camera was going to go and what music should be on. But it was Lily James, who plays Linda, who said that she thought I should direct it. And the producers very much needed her to be attached to the project, so they were much more open to the suggestion that they would have been if it had just been me. And I found myself in the position of sort of a door having opened for me and the choice was either to walk through it or to not, and I walked through it. And I'm so pleased I did because I loved the experience.

MF: I'm so glad you mentioned the camera direction and the music choices in the script that you were adapting because I was going to ask who picked the music. The music choices are exquisite, and you have excellent taste. I love that you dropped The Meters in at the beginning of that second episode, the Cissy Strut was so good!

MF: Do you have those songs in mind as you're writing the script?

Mortimer: I had a few in mind. I mean, it grew as I approached the moment to start making the show. And not a lot of them, I would say half of them I knew before I started directing the show and half of them, or maybe a third of them, came afterwards. But I had a long playlist, which most of the songs that you hear in the show now are on. And yeah, it was just a long process, but it was a really fun one, and I was helped in it by my brother-in-law George Vjestica who's a member of The Bad Seeds, he's in the band, Nick Cave And The Bad Seeds.

And Clint Mansell, the composer, did the composing and the score is beautiful. And George helped me kind of curate these tracks. And when the lockdown came I was about to start shooting and then I had two months of just nothing where I had a long time to think about the music. And that was in those two months in this kind of hiatus before we picked up again, that I really honed in on the music choices and found most of the music that ended up being in the show.

MF: So we've not only learned that Emily Mortimer is a great director on her first time out, but she's got really great taste in music! And your casting choices are great in this, I love Dominic West and I can't help but think that there was probably a lot of direction to be more shouty as Uncle Matthew.

Mortimer: Yes, that's true, there was that direction. Yeah. Be really, really obnoxious and cross and scary.

MF: How did you end up casting Shazad Latif? He's great in this, but it feels a little against type for him to be playing Fanny's husband.

Mortimer: Yes, he's wonderful, and I feel very grateful to him. And I think it was a challenging part because he's got to be very buttoned up and conventional, and he's the OCD character. He doesn't have long scenes to convey this character, and yet he does it so economically. And you do because he's ultimately a very kind of charismatic and charming person, Shazad. And he has that power, but he's hiding it in this. And certainly through a lot of this characterization of Alfred. But yet, I think that there's something very strong and intense about his presence, nonetheless. And so you root for him, and you root for their marriage. And I think he's an incredible performer, I think is a wonderful performance. It's very economic performance, but it has depth somehow. And even though he doesn't really understand what the hell Fannie's on about most of the time you feel he's trying, and you really, you love him, and you root for that marriage.

MF: There's one particular performer that we maybe don't get enough screen time from, that comes in and out as this character, The Bolter. How did you end up playing that one? Because she comes in and just lays down these bits and then disappears, and it's hilarious.

Mortimer: I felt, if I'm going to write and direct this thing, I might as well give myself a good pop because it's hard enough to get work as an actress. If you're going to go through all the trouble of writing something and directing it, then you might as well give yourself a part. But I then regretted that decision very quickly. In the run-up to the shoot, I was terrified. And I felt I just wanted to get out of being The Bolter. I was thinking, "this is just one, two things too many." And I tried to fire myself on numerous occasions. I kept ringing up the producers and saying, you've got to sack Emily as The Bolter, she can't do it, she's far too busy, she's over extended, and they wouldn't let me.

But I'm really pleased I did, and I really did enjoy it. I mean, it was hell at the time, but The Bolter. I just love how unapologetic she is. She's an absurd creature, she's an awful creature in a way, but it was very liberating for me. I'm someone who's very naturally very apologetic and very aware of my own shame, and The Bolter is shameless and completely unapologetic. And so it was liberating for me to get to play her and I really enjoyed it.

MF: Is it hard to keep from judging The Bolter, or even Linda, when Linda all but abandons he daughter?

Mortimer: It was really important to me that this business of mothering and bad mothering was explored in a way that was forgiving. I mean, it's not like they get away with it completely, at all, but I think that it's a taboo subject and I think that there's huge pressure, mainly on women of course, but on men too. But just because for centuries, women have been the caretakers of children, and we still have this burden on us, mainly the kind of emotional happiness of the children feels more... I think women feel more personally responsible still then men, although it's definitely changing. And I wanted to explore the idea that there've been centuries of very bad fathers that nobody's ever raised an eyebrow at, but if you're a bad mother, it's tantamount to being a very bad person.

And I think it's worth exploring that notion. Well, what it is to be a bad mother, what does that mean? What do we mean when we say that? And is there a way of understanding why a woman, especially at that time, might've felt that the only way that she was going to be able to escape a very unhappy situation, a very unhappy marriage, was to have to leave her child. And is there a way in which we can bring ourselves to at least understand it, maybe not forgive it, but at least understand it. So it felt really important to me that that was investigated and as in a forgiving and honest way as possible. Obviously, I don't hold up those characters as great mothering role models, but they're good for other reasons.

MF: So often you get to see a male character wander off and abandon his family and just be a gadabout, ne'er-do-well. And the series is, if not okay with Linda and Bolter doing that, they at least don't get punished for that specifically.

Mortimer: Yes, which they would in pretty much any other, even any other contemporary thing. I think it, you have to like people, it's very difficult to write a female character that isn't very nice to their children. That is also something that you expect the audience to feel sympathy for. And, I don't know whether the line is still in there, it's not in the book, I put it in there, but it was a line where she says, look at it Odysseus. He went off on his noble journey and 3000 years later, we're still singing about him, nobody questioned that he left his children behind, nobody worries. And that's the question you get asked as an actress and a performer all the time, how do you deal with leaving your children behind? And of course it's a nightmare and of course it's a very complicated issue. But men never even get asked that question.

'The Pursuit of Love' is now available on Amazon Prime.