'Kubo and the Two Strings': 12 Things We Learned From LAIKA 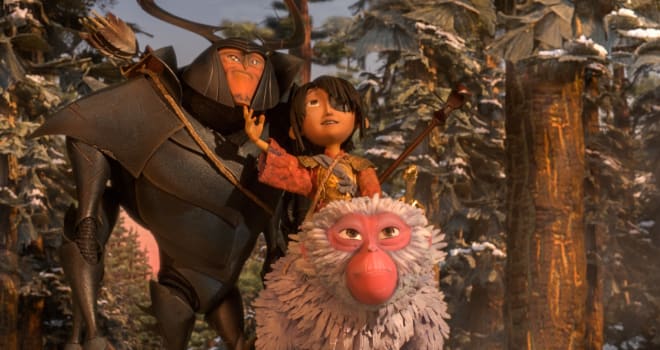 Last month, we had the chance to visit LAIKA's impressively huge studios outside Portland, Oregon to go behind the scenes on their latest stop-motion animated adventure, "Kubo and the Two Strings." One of the few one-stop-shop animation studios in the industry, LAIKA takes its time between projects, because if there's one thing we learned, stop-motion (even when aided by computer-generated technology) takes a loooong time to complete (just a few seconds could take an animator an entire week).

While LAIKA's last film, "The Box Trolls," was set in an alternate, steampunk-themed Dickensian London called Cheesebridge, for "Kubo," they've crossed a continent (or two) and gone back a couple of centuries to depict a magical version of ancient Japan. Unlike "The Box Trolls" and "Coraline," "Kubo" is an original screenplay and the directorial debut of LAIKA CEO Travis Knight, who, in addition to producing, continued to animate on "Kubo."

The coming-of-age adventure follows 12-year-old Kubo, a hero character with the magical power to make origami come to life when he plays his shamisen (a traditional three-stringed Japanese instrument). A gifted storyteller, Kubo embarks on a life-or-death quest to uncover his family's ancient magical secrets and save his mother (and the universe) from the villainous Moon King (Ralph Fiennes) and Twin Sisters (Rooney Mara). Along the way, he teams up with two friends -- a maternal monkey (Charlize Theron) and a courageous samurai beetle (Matthew McConaughey) -- who aide him on his quest.

Here are 12 things we learned from the set of "Kubo and the Two Strings" (opening August 19th). 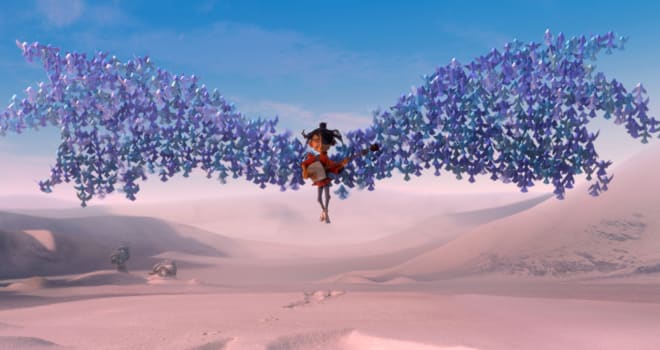 1. It's inspired by Japanese film, art, and folklore.
The filmmakers were directly influenced by Japan, but the story is definitely set in a fictional ancient Japan. Still, great pains were taken to make sure certain cultural aspects were as accurate as possible. The production team studied aspects of Japanese history and design that influenced the film's story, style and setting. "I read a lot of history books and did a lot of research to try and immerse myself in a culture that wasn't at all familiar to me at the start," costume designer Deborah Cook told us. It was a big departure from the Dickens meets steampunk meets "Monty Python" world of "The Box Trolls": "This is completely different from our previous film," Knight says. "It was really exciting for our artists, because we always want to create new worlds."

2. It's a quest story.
Kubo lives isolated with his mom, but he goes into the village to tell his stories for a living. He has this magical ability to make his origami creations come to life for his popular story time (for which the villagers pay him a gratuity), but soon he realizes there's more magic in him his mom hasn't explained. After unknowingly waking an ancient, vengeful spirit, he must go forth to find a suit of armor that belonged to a father he's never known -- a legendary samurai. During his journey, he befriends two unique helpers who protect him (as he does them) in order to fulfill his mission. If that sounds familiar, it's because, like every fantasy hero, from Frodo to Harry to Luke, Kubo is on an epic quest that's the difference between life and death. 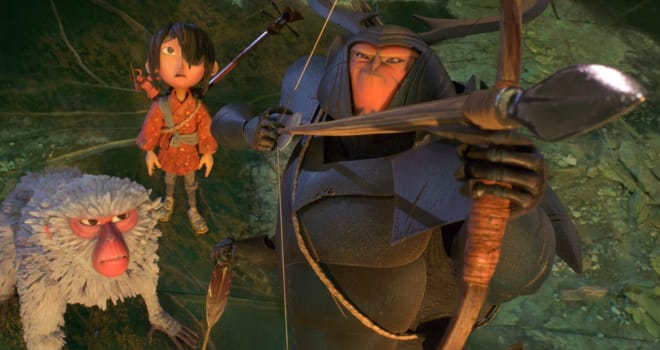 3. The entire production incorporated woodworking and origami elements.
The filmmakers used origami paper-folding and woodblock printing, particularly the work of 20th-century printmaker Kiyoshi Saitō, to tie the entire "Kubo" world together, whether it was a snowy tundra, the belly of a whale, a fortress, or a rural village. Taking cues from the artwork, the landscapes were unified with a simple natural color palette, stencils and paint to create a similar texture throughout the film. "You can see the mark-making woven throughout the film, and it gives the film it's own signature," says Knight. As for the origami, its use is most obvious in the costumes, which were inspired by the precise lines and creases used in traditional paper-folding. "We started playing around with paper to see how the fold language translated to costumes, like sleeves on Kubo's kimono," Cook explains. All the drapey parts of the costumes had precise creases and paper-looking lining.

4. Matthew McConaughey was cast because he's got the swagger and heart.
All right, all right, all right. If there's one thing McConaughey knows how to convey it's cool, not to mention courage under fire, laid-back humor, and a confident, sexy machismo. All of those character traits made him an ideal choice to play Beetle, and the filmmakers were thrilled he loved the script so much he read it to his kids and needed no convincing. The LAIKA folks have little trouble luring award-winning actors to their projects, and "Kubo" is no exception (Charlize Theron, Ralph Fiennes, Rooney Mara, etc.). 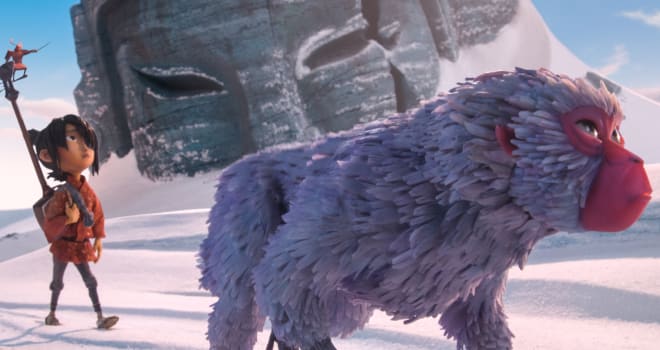 5. Creating the puppets is a very involved process.
"Kubo" raised the bar for LAIKA's puppet lab. To build a stop-motion puppet, you start from a character's drawn concept design, studying the silhouettes in costume. But the most important aspect from the puppet-making perspective is developing the internal skeletons -- called armatures -- which are all designed in-house at LAIKA with wires, steel, and ball and socket joints, then topped with the hand-painted resin puppet. The puppet-fabricators need to know everything the character will do to make sure the puppet will move as its character is intended. The fully furred monkey, therefore, presented a significant challenge. "In stop-motion animation, the idea of hair or fur will make most animators run for the hills," explains Georgina Hayns, creative supervisor for puppet fabrication. Not only was Monkey furry, but she could fight, she got wet, she was ridden. "Monkey was the most intimidating puppet we've made." In a process that involved using a patented fake-fur body suit for the puppet and special "wet" or "action" versions of the puppets for particular scenes, LAIKA was able to step up their innovation game.

6. The movie was also inspired by Steven Spielberg.
Knight confessed to us that the first movie he ever cried in was "E.T." and, as is the case for many Generation X filmmakers (he's 41), he grew up a Steven Spielberg devotee. In researching who inspired Spielberg, Knight discovered it was filmmakers like David Lean and Akira Kurosawa. "You start following down the rabbit hole, and it starts opening up whole new influences," Knight says. "That was the direct path for me to get to 'Kubo.' It started with Spielberg, which led to Kurosawa, which became what this film is." Knight also loves comics, "Star Wars," Tolkien, Jack Kirby, and fantasy, all of which is evident in "Kubo," he says, since all the artists have an array of personal inspirations. "We're scavengers here, pulling from different aspects of our lives, our experiences, our influences, childhood loves and obsessions. They get all get poured into this big gumbo and hopefully something new comes out of it." 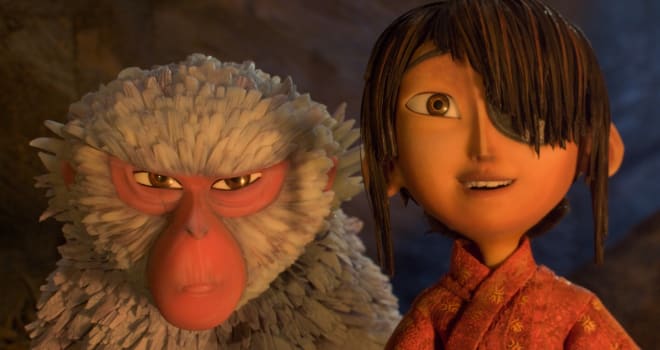 7. The movie has been in the works for five years.
"It's been a long road. We started this project have a decade ago when we were still working on 'ParaNorman,' so to get to the end of one of these films is bittersweet, because it's been a part of your life for so long," says Knight. "Once it's done, it's done, and it goes out to the world. It's a weird thing. It's all of our lives poured into this thing, and then it belongs to everyone."

8. It's a marriage of stop-motion and CGI technology.
Whatever doubts LAIKA's stop-motion purists had about CGI were put to rest with the close-knit way the computer-animation team works with the stop-motion crew to create a seamless, unified look between the hand-made and digitally-made elements, starting on "ParaNorman." "What I came to learn and what it means to me is that hybrid films are about storytelling without limitation," visual effects Steve Emerson. "Stop-motion films are incredibly difficult to make, because everything has to be physical ... so the idea of hybrids was 'when a storyteller comes in with a vision, let's deliver that vision. Let's not ask them to simplify their stories.'" So LAIKA embraces technology but "does so in a way that honors stop-action animation." In a village crowd scene, for example, every character and background must live up to the standards set by the design, costume, and physically made worlds. 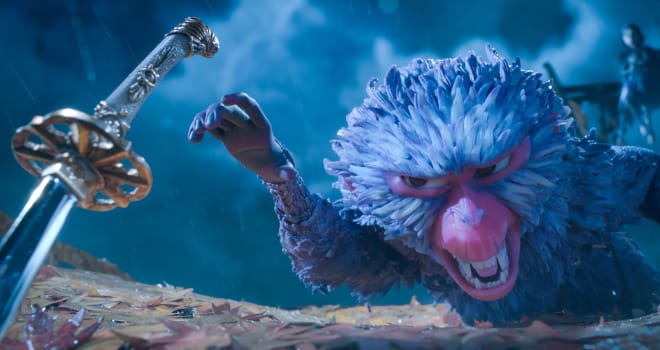 9. The Twin Sisters have intricate costumes.
LAIKA's puppet lab supervisor considers the masked identical Twin Sisters to be one of her career's highlights. Hayns says there's always a puppet that you're most proud of on a project, but Sister is the puppet she's "most proud of in her entire career." The Sisters have these black feathery capes that turn into wings that allow them to fly and fight the story's heroes. The capes required Hayns's team to use piano wire to hold together 183 feathers that were hand stitched to the meshwork of the cape. The result is a cape that believably moves first like a garment and later like pulsing wings.

10. The movie wouldn't be possible without 3D printers.
Almost every stop-motion character requires replacement faces -- removable heads and facial features to convey specific, minute expressions and facial performances. Before 3D printers, facial expressions were simple for physical stop-motion puppets. According to LAIKA, Jack Skellington in "The Nightmare Before Christmas" had about 10,000 expressions, but the level of subtlety required on a LAIKA film is so high that, thanks to the printers, the main characters are able to evoke over one million facial expressions. By splitting the face in half -- isolating the brow from the mouth -- the rapid prototype team can provide the variety of expressions necessary for each scene. 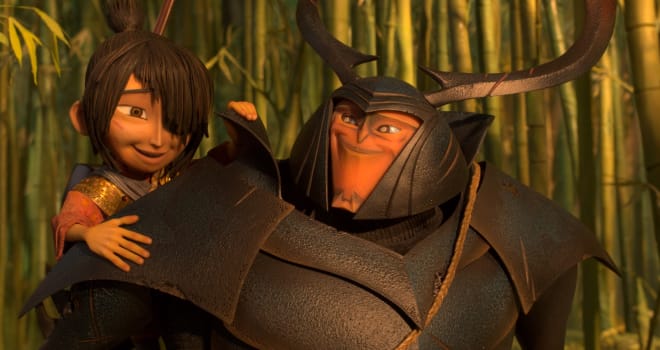 11. It will make audiences, especially parents, emotional.
Even the 15-20 minutes of footage we previewed were enough to elicit tears, with Kubo lovingly hand feeding his nearly catatonic mother rice and gently taking care of her. Knight wants audiences to have a visceral connection to the film. "A good story can elicit empathy, can allow us to walk through someone else's shoes, to see the world through someone else's eyes," he says. "Stories can change us ... and those are the kinds of experiences we want to make, the stories we want to tell."

12. There was a Japanese cultural consultant on hand.
LAIKA is sensitive to paying tribute to Japanese culture. "A period piece set in a culture that you're unfamiliar with is a real challenge," admits assistant art director Rob DeSue. The consultant helped advise about various issues and to make sure that, for example, every time they used kanji (Japanese characters) in the movie, it was historically and culturally accurate. "There is creative license taken in the film, since it's a fantasy, but, of course, we wanted to make sure we weren't doing anything offensive and didn't want to get called out for not doing our homework." 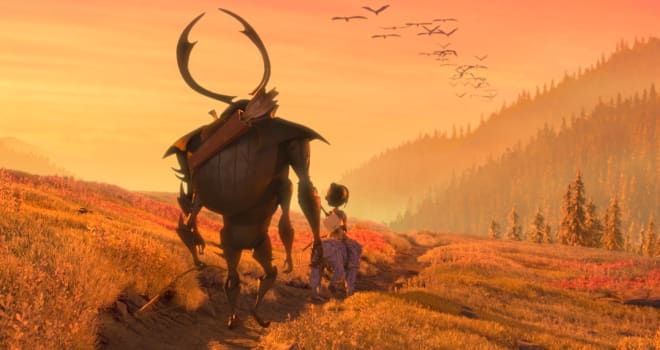 Kubo and the Two Strings

Kubo mesmerizes the people in his village with his magical gift for spinning wild tales with origami. When he accidentally summons an evil spirit seeking vengeance, Kubo is forced to go on a quest to solve... Read More

'Missing Link' Director Chris Butler on His Adventures Through Stop-Motion