Treat Yo Self to Aziz Ansari Hosting 'SNL' Later This Month 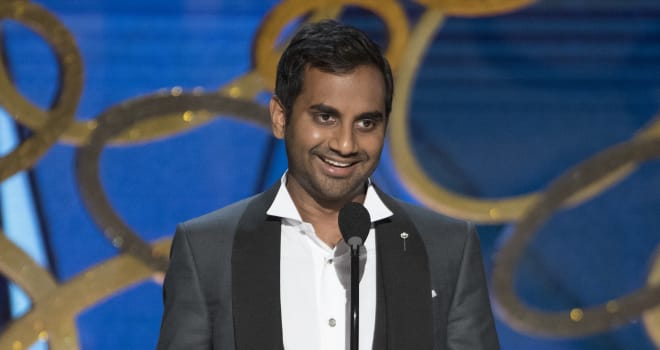 It may not fall on Treat Yo Self Tuesday, but the January 21 edition of "Saturday Night Live" will still be a great indulgence for viewers: Aziz Ansari is set to host the sketch comedy show.

Ansari, a former star of beloved NBC sitcom "Parks and Recreation," currently headlines his own Netflix series, "Master of None," which picked up a pair on Emmys last fall. But the comedian will return to his Peacock roots when he makes his "SNL" hosting debut later this month.

A recent report from TVLine delved into the curious case of "SNL" shunning TV stars -- even those from the network's own shows -- in favor of movie stars as hosts. We're glad that Ansari was able to break through that odd barrier, and think he'll be a natural on the Studio 8H stage. (And we agree with TVLine that Kristen Bell from NBC's "The Good Place" or any star from the network's "This Is Us" would make great future hosts. Get on it, NBC!)

Serving as musical guest for Ansari's episode is Big Sean, who's also making his "SNL" debut. Both Ansari and the musician tweeted about their upcoming gigs, and naturally, both performers are eager to hit the stage.

Excited to host SNL on 1/21. See ya then. pic.twitter.com/geNeWJyUHH

I'm super excited to announce that I'll be performing on @nbcSNL for the first time ever, January 21st. This one is for Detroit ???????? #IDecidedpic.twitter.com/0yMT4lvSix

Ansari's episode is slated for January 21. It will be the second episode back from the show's winter hiatus; "Rogue One" star Felicity Jones will emcee the first episode of 2017, set for January 14.