Wyatt Rockefeller, director of ‘Settlers’ on his sci-fi drama

The director talks about the inspiration for the story and shooting in South Africa. 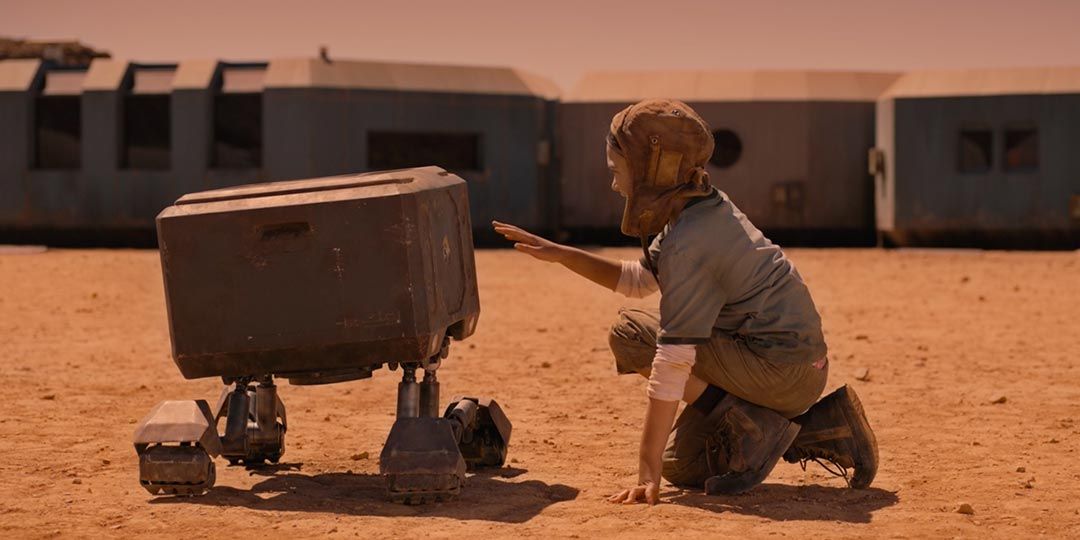 Steve the robot and Brooklyn Prince in 'Settlers,' written and directed by Wyatt Rockefeller

Wyatt Rockefeller’s film ‘Settlers’ features Jonny Lee Miller, Sofia Boutella and Brooklyn Prince as homesteaders on a remote patch of land on Mars. As they struggle to keep the farm running, a group of strangers appears, and one of which (played by Ismael Cruz Córdova) claims that the farm is rightfully his. What ensues is a story about sacrifice and survival, and writer/director Wyatt Rockefeller spoke to us about the movie.

Moviefone: What inspired this story?

Wyatt Rockefeller: It started with a feeling, really. I was with my dad in the woods, and it was snowing. And when it snows, it can absorb all the ambient sound in a way that is really quiet, quiet in a way that we almost never hear. And there was something, at least At that moment, very eerie about it. And I remember looking over to the tree line and imagined being watched by something, someone, looked up ahead of my dad in his old coat and imagined a guy patrolling the outskirts of his farm and thought, what might he be guarding against?

And by the time we got inside, basically had the whole plot. Which is a good sign, when a story tells itself. But also it hit me at a gut level, like wow, that is really dark. Told it to a few others, and they agreed, but it was only then, probably a year later, that I had the idea to set it on Mars. And that's what made me decide to pursue it as a feature, because to set it on Mars in a moment where it's changing, where it's in the process of being terraformed to suddenly unlocked all these dramatic and also very visual opportunities.

A lot of people have noted this could really be set anywhere. And I agree with that to a certain extent. And I was when I made the decision to set it on Mars, I was thinking about places where they couldn't leave, because it is integral to the plot that they feel that this is their best option, if not their only option. Because that's what forces them to reckon with these choices that they wouldn't in a million years consider other than that this is maybe their only choice. And that for me is... What's interesting about this, it's people having to confront those choices.

MF: In the scene where Jerry burns the face masks, I immediately thought of those stories about the conquistadors burning their ships, so that the their crews were forced to make their settlements work. Are you specifically setting out to comment on the idea of settling across various generations?

Rockefeller: The short answer is no. But for me, the story comes first, the characters come first, the whole background and any larger message that people may draw from this, I think it's all secondary. It has to come from the story. And I think if your goal is to make an argument or to convey a specific larger message, then you're probably better suited to another medium, or I think you're probably going to undercut the potential of the story you're trying to tell.

That doesn't mean you can't deal with these larger issues. I think it, at least in terms of my own priority, it really does begin and end with the story and the character. Now, that said, my wife was one of the producers. She said, "Look, I know you didn't mean to write a political movie and this isn't a political movie, but you do have to recognize that you started writing this in the fall of 2016, and you have ended up writing a movie about ecological collapse, the resulting mass displacement of people and sexual power dynamics."

And so I think that is a fair point. We are products of our times. And I will also say, one of the real advantages of working in genre and working in sci-fi, where you're basically making it up I mean, we're trying to adhere to the science, but effectively making it up, you can do an end-run around people's biases. You can engage with current themes, current topics, but the names and the places are different. So people I think are a little bit more open when they come to this.

MF: That's one of the great things about science fiction as a genre, is that you can look at issues we're facing and take out some ancillary effects. Was it a conscious choice to only reference the background that various people are coming from without necessarily explaining every detail? You get hints that the people on Mars don't like the people from Earth, but you never get into that too deeply.

Rockefeller: Yeah. It was very conscious, and it was an ongoing choice really. I mean, I admittedly agonized during the writing stage while we were shooting in the edit about how much do we need to provide? I think it's very important that you, as the filmmaker, really do have an answer to everything. And I think especially because they are in such a remote location, where everything that you see in the background has to have a reason for being there. So it has to have a reason to have made the trip, so it all needs a backstory. But then, and I think having that base then allows you to create a texture that is believable. But then you really do, I think, need to pick and choose about what is actually relevant for people understanding of the dynamics that play between these characters and what is going to be extraneous. So it's a judgment call that you have to continuously make.

Rockefeller: Well, when my wife and I, and we had a script, and we basically sent it around to everyone and their mother, and we thought, wouldn't it be great to find a girl like Brooklynn Prince? And then out of the blue we got a call from an agent who had read the script, he had gotten hold of it, and he said, I really liked this. Who did you imagine? And just so happened that they repped Brooklynn and got it to her. And she and her parents liked it and attached. And that was actually what got this going, got it off the ground. And they stuck with us through thick and thin as the whole thing came together.

MF: What was that like for you on your first feature, working with Sofia Boutella, Jonny Lee Miller and Ismael Cruz Córdova?

Rockefeller: It was an incredible opportunity to work with such talented actors who come with very different approaches. And I'll give you an example, Ismael, he likes to do multiple takes without cutting, and it gives you a few options and that was really fun. And it was based on I think I trust, that they have to trust you as a director, especially as a first time director. They really wanted to understand how did I see this and what was the relationship between their characters to this setting, to this world. But then once I had that confidence in what I was doing, that I had a clear vision, that gave them the confidence to then inhabit their characters and feel free to make choices that felt honest to the characters. And that was a process that we felt through together. And that's the fun of it.

MF: Not only is this your first feature as a director, but you're also on location for what looks like almost the entire shoot. What tools do you use as a director to convince your cast and your crew, and everybody else, I have a vision for this, we're going to work it out together.

Rockefeller: I think putting them in such an isolated location probably helps. It was great that they didn't have all that much else to do then make a movie. But also they show up, it was so exciting to bring each actor to set for the first time, because we had this full 360 degree set. So I didn't actually have to explain it to them, they could see it for themselves. And it was an incredible set that Noam Piper, the production designer, designed.

And we were also, thanks to the fact that we were in South Africa, which has very generous tax credits and such a talented crew base, that we really were able to build at a larger scale than we would have probably anywhere else. And I would say that, putting them in an isolated environment and giving them that 360 degree experience really allowed them to actually, I think, get into character and imagine what it would be like to be so far out there.

MF: I would be remiss if I don't talk about Steve the robot. Is Steve mostly a practical effect, or was there a fair amount of CGI in that?

Rockefeller: It was a mix. So he was both a puppet and a CGI. Basically, when you see the more elaborate movements, that's CGI. But we had to be very specific about where we deployed it. So we story boarded all of his scenes. But it was this really fun collaboration. Actually, I wrote a piece in detail on it, on talkhouse.com if you want to learn more. But I don't have time to go into it here. I'd love to, because it really was probably the most fun of the whole thing.

I grew up reading through books on ILM, and we had a workshop about how they designed all those creatures and everything else, to be able to work with both the VFX and the puppeteers, and the creature designers to figure out, well first of all, what does Steve do? What is his function down to real specifics? And then go from there. I really wanted the design to follow his function. And I think that's what ultimately allowed us to get to something that feels both very much a part of the world and unique.