A remake of the 1961 classic musical, Steven Spielberg’s ‘West Side Story’ is more like a photo-copy of the original, and while beautiful to watch, has nothing really new to offer. 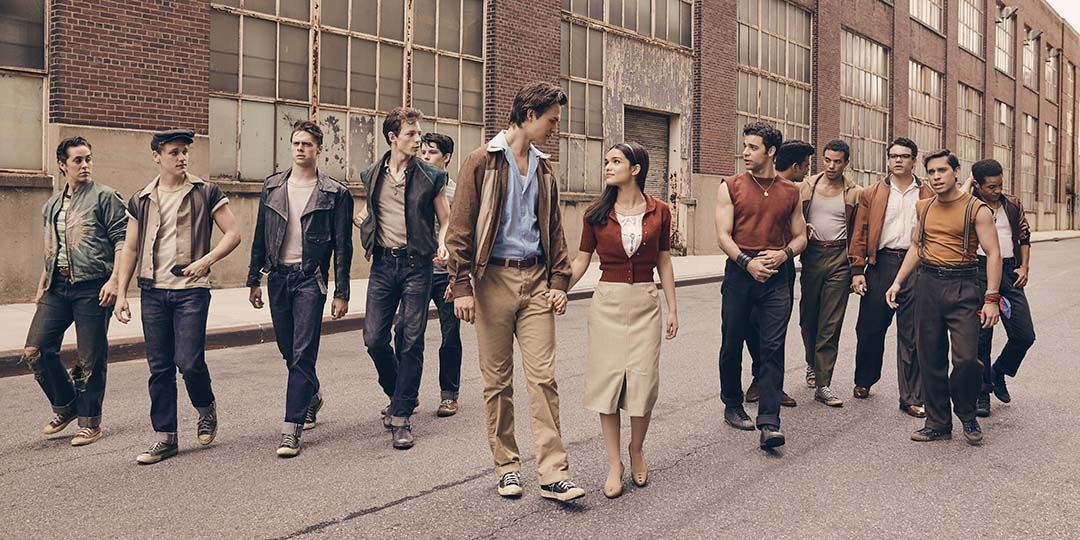 Opening in theaters on December 10th is the new musical remake ‘West Side Story,’ which is based on the Broadway play and the original 1961 film of the same name. Directed by Oscar winner Steven Spielberg (‘Schindler’s List) and written by Oscar winner Tony Kushner (‘Lincoln’), the film tells the story of teenagers Tony and Maria, who are both affiliated with rival street gangs in 1950s New York. The movie boasts a strong cast of actors including Ansel Elgort (‘Baby Driver’), Rachel Zegler (‘Shazam! Fury of the Gods’), Ariana DeBose (‘The Prom’), David Alvarez, Mike Faist (‘Touched with Fire’), Brian d’Arcy James (‘Spotlight’), Corey Stroll (‘Ant-Man’), and Academy Award winner Rita Moreno (the original ‘West Side Story’). The result is a fairly satisfying and visually stunning remake, with some strong performances, which ultimately does not work because there is nothing really new to separate it from its predecessor.

In 1950s New York, two gangs of teenagers, the white Jets, and the Puerto Rican Sharks, struggle for control of the Upper West Side, which will be remodeled soon to become Lincoln Center. The Jets are led by Riff (Faist), and the Sharks are led by Bernardo (Alvarez). After a fight between the two gangs, Rif wants to challenge the Sharks to a rumble, and asks his friend, Tony (Elgort) for help. Tony is a founding member of the Jets, but after nearly killing a boy in a fight, just served a year in prison and wants nothing to do with gang-life. With no family of his own, Tony works at the local drugstore and lives there with its owner, Valentina (Moreno). Tony agrees to go to a local dance with Riff, where the Jets will challenge the Sharks to a rumble.

Meanwhile, Bernardo’s sister, Maria (Zegler), and his girlfriend Anita (DeBose), are getting ready for the dance. Bernardo brings his friend, Chino (Josh Andres Rivera) as Maria’s date, and reluctantly she agrees to go with him. At the dance, Tony and Maria meet, and quickly fall in love. But their time together is short, as Rif challenges Bernardo and the Sharks to a rumble set for the following night. Tony follows Maria home, and eventually they decide to run away together. But before that happens, the rumble takes place and quickly escalates to a tragic degree, leaving Tony and Maria unsure if they can ever actually be together.

I am not the biggest Steven Spielberg fan, but I do recognize him as one of the greatest film directors of all-time, and I have enjoyed several of his recent films, including ‘The Post,’ ‘Ready Player One,’ and ‘Minority Report.’ So, it surprised me that ‘West Side Story’ is basically a shot-for-shot remake of what is widely considered the greatest movie musical of all-time. Spielberg does not update the story, other than casting culturally appropriate actors, and giving a new role to Rita Moreno, who played Anita in the original movie. Other than that, pretty much everything is exactly the same, and it makes me wonder who is this movie for? And why wouldn’t you just watch the original?

That being said, it is interesting to watch the “Spielbergian” version, equipped with a very well-polished screenplay by Tony Kushner. Again, he’s just adapting the already brilliant material, loosely based on William Shakespeare’s ‘Romeo & Juliet,’ but the dialogue and tone is excellent nonetheless. The color pallet of the film is extraordinary and definitely has that “Spielberg feel.” Tony Award-winning Broadway choreographer Justin Peck did an excellent job with the dance sequences, although, dancing knife fights didn’t really work on-screen in 1961, and they still don’t work today. Some of the best parts of the movie are the musical numbers, but again, nostalgia plays a big part in those sequences too.

The cast on a whole is quite good, but let’s begin by addressing the elephant in the room: Ansel Elgort. The actor is way out of his depth in this role, and his biggest challenge is caring the weight of the story with conviction, which at times he is unable to do. Elgort is a charming actor, and I really enjoyed him in ‘Baby Driver,’ but in ‘West Side Story’ there are serious moments where you feel like the actor is just on the verge of a smirk, and doesn’t understand the gravity of the situation his character is in. Elgort’s charm works to make the character likable, but at times he comes off a bit aloof, and you begin to wonder what Maria is making such a big deal about?

In complete contrast, Rachel Zegler is adorable as Maria, and beautifully captures the character’s hopes and dreams. She is wonderful in the singing and dancing scenes, and I think this film will be a launching pad for a very successful career. Similarly, Mike Faist was really good as Riff, and brought a slick and believable street-smarts to his part. Just like in the original, the character of Anita is the true show-stopper, and Ariana DeBose takes over the role Rita Moreno won her Oscar for with class and grace. The actress has an amazing singing voice, and sparkles in Anita’s signature song, ‘America.’ Supporting actors Brian d’Arcy and Corey Stroll give strong performances as usual and bring a lot of humor to the film.

In some ways, the film really feels like a love letter to Rita Moreno, who is also a producer on the project. Changing the role of Doc to his widow, Valentina, and casting Moreno is the smartest and only original thing the movie really did. It was also brilliant to have Moreno sing the musical’s signature song, ‘Somewhere,’ instead of Tony and Maria, as it would have been a shame to have Moreno in the movie and not sing. The legendary actress gives a very strong performance, and I wouldn’t be surprised if Academy voters show the icon some love come Oscar time. In the end, Steven Spielberg has delivered a beautiful and visually stunning, but unnecessary remake of an all-time classic without offering anything truly new or exciting to entice the audience.