Movie Review: ‘Being the Ricardos’ Is Not Only Screenwriter Aaron Sorkin’s Best Film As A Director, But It Is Also One Of The Best Films Of The Year 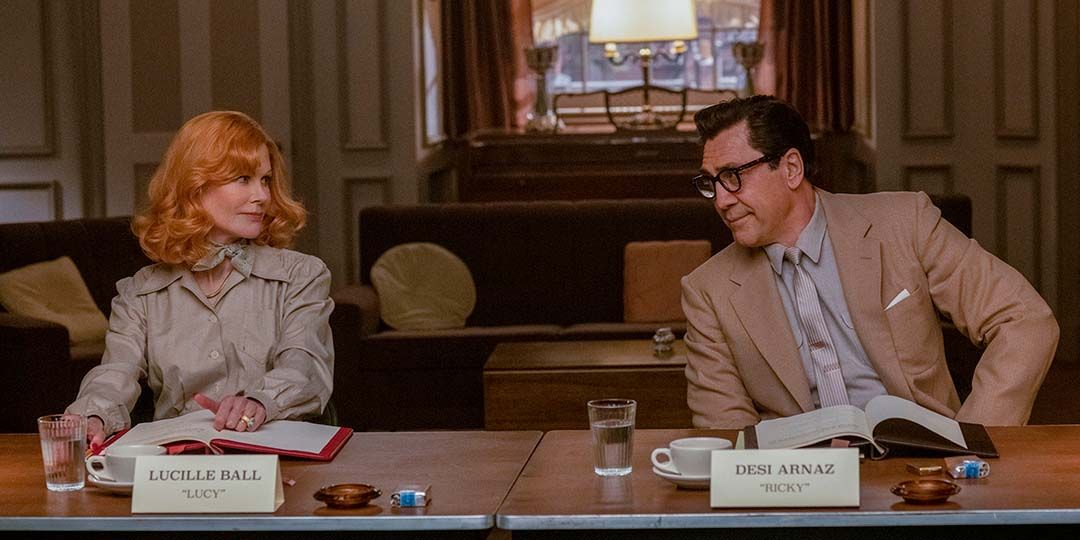 Nicole Kidman and Javier Bardem in 'Being the Ricardos'

Currently, in theaters, before streaming on Amazon Prime December 21st, is the biopic ‘Being the Ricardos,’ which was written and directed by Oscar-winner Aaron Sorkin (‘The Trial of the Chicago 7’). The film follows the working and personal lives of legendary television pioneers Lucille Ball and Desi Arnaz, as the married couple try to produce their hit show ‘I Love Lucy’ the same week Ball is accused of being a communist during the height of the McCarthy hearings in the 1950s.

The film begins like a documentary with several interviews from former ‘I Love Lucy’ writers, now in their 80s, narrating the story, which then cuts to the set of the series in the 1950s and focuses on a specific week in history. As the movie begins, ‘I Love Lucy’ is the most popular show on television and Lucy and Desi have become the biggest stars in Hollywood. But trouble begins when it is reported on the radio that Lucy is a former member of the communist party, which happens at the height of both her fame and McCarthyism. Fearing that it is true, the heads of the network and the advertisers meet with Desi, who assures them it was just a mistake, and that Lucy simply checked the wrong box. But Lucy would rather have the country know the truth, that she was influenced by an Uncle, rather than think she made a “ditzy” mistake.

Meanwhile, Lucy is also dealing with her new-found fame, Desi’s adulteress behavior and being pregnant, which also threatens the future of the show. Understandably stressed out, Lucy focuses on work, taking time to make sure everything on the show is done right, which begins to anger the director, writers, and other cast members. Lucy’s co-star, Vivian Vance (Arianda) is battling her own demons playing the “frumpy friend” on the series, fighting to have her character appear “prettier” on the show. While Lucy’s other co-star, William Frawley (Simmons) has a hard time staying sober through the day, he also hates communists but sympathizes with Ball instead of condemning her. The story culminates with the production of that week’s episode and Lucy discovering if America will still love her or not when they discover the truth. The film also flashes back periodically to important moments from Ball and Arnaz’s lives, including how they met and fell in love, and what led to their career resurgence and the creation of ‘I Love Lucy.’

I’ve been a fan of Aaron Sorkin for a long time. The first play I ever read was ‘A Few Good Men,’ and I was a huge fan of ‘The West Wing.’ While he did not direct them, I love many of the movies that have been made from his screenplays, including ‘Charlie Wilson’s War,’ ‘Moneyball,’ ‘Steve Jobs,’ and ‘The Social Network,’ for which he won Best Adapted Screenplay at the Academy Awards. However, his first directorial effort, 2017’s ‘Molly’s Game’ didn’t work for me. The dialogue and characters were great, but cinematically I was not impressed. That changed with last year’s ‘The Trial of the Chicago 7,’ which was visually stunning but still had the weight of strong characters and fascinating dialogue.

But ‘Being the Ricardos’ is Sorkin’s best work yet as a director, creating an almost flawless movie that seemingly jumps time periods without ever losing the audience or the themes of the story. The writer/director also hits on many themes from the 1950s that still resonate today, like political fear and women’s rights, through the lens of Ball’s unusual predicament. I expect the film is in the running to receive Best Picture and Best Original Screenplay nominations, and maybe even a Best Director nomination for Sorkin too, at the 2022 Academy Awards.

The supporting cast is terrific with a lot of familiar TV faces to recognize including ‘Arrested Development’s Tony Hale and Alia Shawkat, ‘Agents of S.H.I.E.L.D.’s Clark Gregg, and even ‘Alice’s Linda Lavin as the older version of writer Madelyn Pugh. While she will probably get left out of this year’s Oscar race, actress Nina Arianda should definitely not be! She gives a tremendous supporting performance as Vivian Vance and brings a lot of humanity and vulnerability to the role. But I’m really hoping J.K. Simmonds will get an Oscar nomination this year for his role as William Frawley. You think that the usually drunk and crusty Frawley is going to be an antagonist to Ball in the beginning, but he becomes one of her strongest supporters thanks to a beautiful and earnest performance from Simmons.

But there is no doubt in my mind that Kidman and Bardem will receive Oscar nominations for their performances in ‘Being the Ricardos’ this year. Bardem will have a tough time winning, since this is “Will Smith’s year,” but Kidman could very well win her second Academy Award for this performance, but she will have to beat front-runner Kristen Stewart first. Bardem is absolutely mesmerizing as Desi Arnaz and gives one of the most multifaceted performances of his career, both singing and dancing as the charismatic performer. I can’t say I’ve always been a Nicole Kidman fan, but she was nothing short of incredible as Lucille Ball. She was so good that there were times I actually forgot I was watching Kidman and thought it was Ball, and that’s probably the best compliment you can give an actor that is portraying a real person. Kidman perfectly captures the drive, confidence and determination it took for Ball to become the legend she is, and has wonderful onscreen chemistry with Bardem.

In the end, ‘Being the Ricardos’ hits a new level for Aaron Sorkin as a filmmaker and is fairly close to a perfect film. It’s entertaining, moving, funny, and tells a true story that still feels relevant today.

‘Being the Ricardos’ receives 5 out of 5 stars.