Trending
’The Batman’ The Bat and The Cat Trailer
’Doctor Strange in the Multiverse of Madness’ Trailer
’Spider-Man: Across the Spider-Verse (Part One)' Teaser
’Uncharted’ Trailer #2
January 1st, 2022 - by Sarah Aubin

With Disney+ series for Boba Fett and Obi-Wan Kenobi, here are some other characters that deserve their own shows.

With the premiere of ‘The Book of Boba Fett’ and the recent news about the Obi-Wan Kenobi series, it’s obvious that the Star Wars extended universe is here to stay! So if Kenobi and Boba Fett can get their own series, who else could Disney tap to get their own series? Read on to check out our top five picks of characters that could maybe make the best Disney+ series. 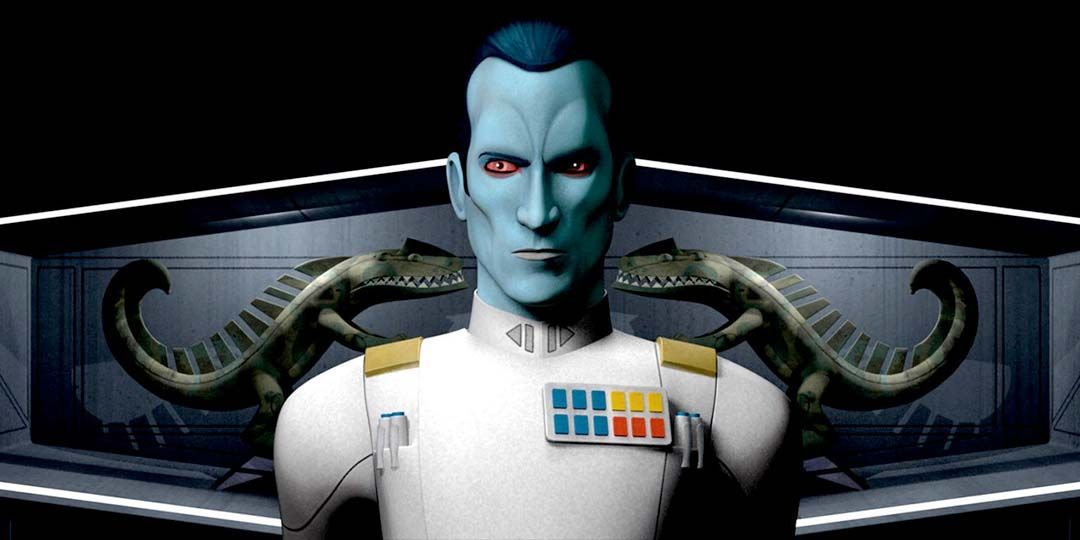 Considered by many to be one of the greatest characters of the "Legendary" line of stories, Grand Admiral Thrawn got reintroduced in his 2017-2019 trilogy of books by his original creator and made a major threat in the 'Rebels' TV series. In the canon, Thrawn was a Chiss warrior who joined the Empire after being exiled. Many fans consider Thrawn to be one of the best side characters in the series, and it appears Lucasfilm has way more plans for him as he received not one, but two book trilogies, with the last novel releasing in the middle of November. With his character being a tactician of the Empire, a TV show just focusing on him, and his backstories as chronicled in multiple books and comics seems like a no-brainer. It would be an interesting take on the Star Wars TV universe, turning away from the action of shows such as the Clone Wars and Bad Batch to focus on the political side of the Empire seems like a fascinating premise in of itself. And with the popularity of the character, Disney is honestly sleeping on a hit TV show.

This entire list is just going to be filled with characters we love. Doctor Aphra was so well received when she was created for the ever-popular Darth Vader Marvel Comics run that she’s the first new canon character to get her own comic series, with Star Wars: Doctor Aphra releasing in 2016. She’s beloved, and her characterization is partially to thank for that. An archeologist who teams up with Darth Vader to make him an army of assassin droids, Aphra has been described as unlike most Star Wars side characters. Basically, she’s not the top person to do the right thing…most of the time. A TV show about her escape from working with Vader would be a fun, Indiana Jones-style time and would even be introducing one of Star War’s few LGBTQA+ characters, and banter between her and her romantic partner Magna Tolvan would be incredibly fun to witness on screen.

Okay, this is really a personal choice. Poe is, in my opinion, one of the more interesting characters in the new trilogy. A brash, damn good pilot, Poe is one of the Resistance’s poster boys and best pilots. With his family military background and his trusty copilot BB-8, he became a much-loved member of the Star Wars canon. But where could a TV show go? Well, with the last Star Wars film, we know that Poe wasn’t always a golden boy. He was a spice runner, and while that was a rather weird-handed story beat, that’s easily something that can be expanded on. Where was he before the battle against the Resistance and the First Order? Did he even work for them at one point? A TV show based on everyone’s favorite pilot, learning the dark and seedy side of the new Star Wars trilogy would bring a new (darker!) light to the new trilogy and characters behind it. Plus, showing Star Wars’ new golden boy—and his dark side that he had before all the Resistance stuff—will bring it a lot more of the extended universe fan base who maybe couldn’t get into the base series.

Now for something completely different and more fun. We all know Chewbacca, we all know what he’s done for this franchise (and the galaxy!) and how let’s be real, he is the major hero that no one deserves, but everyone is lucky they have! But what would Chewie’s own show look like? Would his show follow his origins, or possibly what he was doing with Han Solo in between the original and the new trilogy? What if it was none of those things? Going completely off canon for the fun of it here, what if Chewie ran his own intergalactic talk show? Interviewing every major, or up and coming, figure in the galaxy. While it would never happen, we can only dream at the idea of a non-canon—but fun—entry into the Disney Star Wars TV universe. Especially with the freedom of characters you can have on. From canon video game heroes to the recent comics. It could be a fun way to introduce the soft core fans into the extended universe with a bit of humor and flare.

For our last entry, we honestly have no idea why Disney has not greenlit a Star Wars Jedi: Fallen Order project. Considered by most to be one of the best Star Wars video games, the title follows Cal Kestis, a canon Jedi survivor of Order 66 as he is hunted by the Empire. The possibilities of this are endless, from following the game’s lore and its characters to continuing Cal’s story after the events of the game, to even Cal’s experience during Order 66. Respawn and their writing team created an incredibly engrossing entry into the Star Wars canon, and Cal is to be thanked for that. While other Star Wars stories before have discussed Jedi survivors of the Empire’s attack before, none have gone into much psychological detail as Fallen Order has. To most, a TV show is much more approachable (and appealing) than a video game is. And it’s a crime that more low-key fans have not seen Cal’s story yet. That’s why it would make a fantastic starting point for any Disney+ show.

That’s our picks for the best Star Wars characters that totally need Disney+ shows. Did we miss any, or were we, unlike the aim of most Stormtroopers, on the target? Let us know in the comments below!