The protector(s) of the night and battle of the gods. 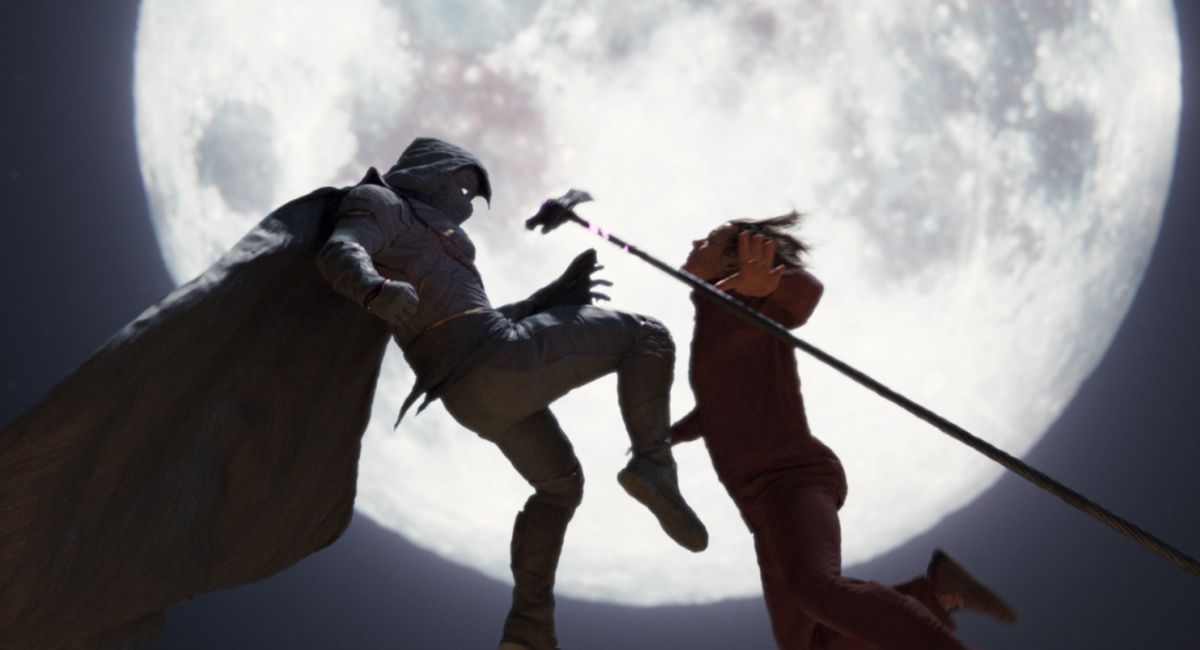 Last week's episode ended with us in paradise, welcome to the season finale of ‘Moon Knight’.

We open on Marc being dragged out of the pool by Arthur’s men, who place the scarab on his chest and leave. Only for it to be picked up by Layla. Arthur is stopped, and we witness Ammit’s power. Layla goes to kill him, only to be held back by Tawaret taking over her body to tell her she needs to break Khonshu’s statue to bring Marc back.

Harrow breaks into the vault of the gods, getting into a fight with the other avatars and defeating them. He breaks the statue, releasing Ammit back into the world. The goddess asks who brought her back and mentions that Arthur’s scales “lack balance.” Layla also finds and destroys Khonshu’s prison, releasing him. She refuses to become his avatar, only agreeing to help if they can work together.

We cut to Marc in the afterlife being told his scales are balanced. Tawaret explains to him that his afterlife is everything he wanted. Sensing it isn’t right, he tells the goddess they need to get Steven back. Marc runs the other direction and paradise instantly fades. Marc finds Steven buried in the sands, and finally admits he saved him. Apologizing that he couldn’t protect him, all as Marc slowly turns to stone.

The golden door opens and the two of them come back. Tawaret helps Marc and Steven get back to the world of the living while Khonshu and Ammit fight in the Vault. Khonshu senses them returning and inhabits Marc’s body again. He now must talk to both Steven and Marc, and they strike up a deal. They will be his avatar, but once Ammit is gone, they will be freed.

Layla learns how to trap Ammit, but she needs more avatars. Without even words, it’s revealed she’s accepted Tawaret’s offer for help. Arthur makes it to the top of the great pyramid, now working as Ammit’s avatar, eating the souls of the unworthy.

Marc & Steven make it in time, and their fight with Arthur shows how the two of them both have control over the Moon Knight power. Layla appears just as Arthur is about to get the upper hand, looking nearly as powerful as they are, and is the Marvel Cinematic Universe version of the Scarlet Scarab.

Layla saves a car full of people from Arthur and is asked if she’s an Egyptian superhero. In a very moving, but quick scene, she hastily replies, "Yes." Arthur gets the better of Marc, same as Ammit with Khonshu. It seems Marc’s about to lose before he blacks out, waking up to Arthur nearly dead beneath him. Once again, it wasn’t him or Steven who did it!

They take Arthur back and return Ammit to his body as a prison. Khonshu tries to get Marc to kill the body and Layla tells him to stop. He sides with Layla, telling the moon god to release them.

Steven is shown back in the white room with the doctor. He asks the doctor if he believes gods are real, to which he responds, "No." Marc returns to tell him “What if we disagree?” The doctor walks away bleeding, and Marc and Steven team-up  to escape their personal afterlife. Marc wakes up back in Steven’s apartment, with two of everything, including goldfish. And that’s the end!

Now before we touch on anything else in the episode, let’s discuss that end-credit scene.

We’re shown Arthur is now in a mental hospital, really, this isn’t a dream. He’s shown being led away by a man in black, and is taken out to a white car, passing the bodies of killed nurses. He gets thrown into the car and is shown Khonshu in a very fancy suit. He explains that Marc truly thought he left, and that the god needs an avatar strong enough to do his work and not be afraid to get their hands dirty. But that isn’t Marc or Steven.

The god Knocks on the windows, and we’re introduce to Jake Lockley, another alter of Marc’s and the cause of the blackouts. He aims a gun at Arthur, and fires, presumably killing him, and drives off. So ‘Moon Knight’ finally gives us Jake Lockley, but only in the post-credit’s scene. And that, this whole time, it is implied Jake was Khonshu’s avatar. Almost like Marc and Steven were borrowing the powers for themselves.

This version of Lockley is a bit different; we’re obviously shown him more brutal, almost gleefully killing Arthur at the end. In the comics, Lockley was a taxi driver, basically Moon Knight’s ears to the ground. He would gather info on targets, but he was never seen as a killer. So, it’s very interesting where they're taking the character in the future!

Now, for my verdict. How did Marvel do with ‘Moon Knight’? Well, in my opinion, there was way more highs than there were lows. While the show was plagued with Marvel’s telltale CGI fights and spectacles, especially in this last episode, there was plenty of heart and emotion.

A lot of that praise can be placed on Oscar Isaac for absolutely killing it as Marc, Steven and now Jake. He gave a crazy different performance for each character and seeing him switch between two personalities near the end of this last episode blew me away. I would easily put him up there with the likes of Robert Downey Jr. and Chris Hemsworth as fantastic Marvel character casting.

Ethan Hawke plays a very interesting villain, but he weirdly starts off incredibly scary in my opinion but then eventually…is less menacing? At least, he doesn’t stay as threatening as the show puts him up to be, which can be chocked up to Moon Knight himself being way deadlier. I guess I just wanted more of Harrow as a villain. On the outside, he’s a creepy cult leader that is reminiscent of real life evil, but as the show progresses, I just didn’t feel that at the end of the series.

But, even with all the flaws ‘Moon Knight’ had, it’s still one of my favorite series set in the Marvel Cinematic Universe. I cannot wait to see where the hero goes in the future, and if Layla will ever return in her superhero form.