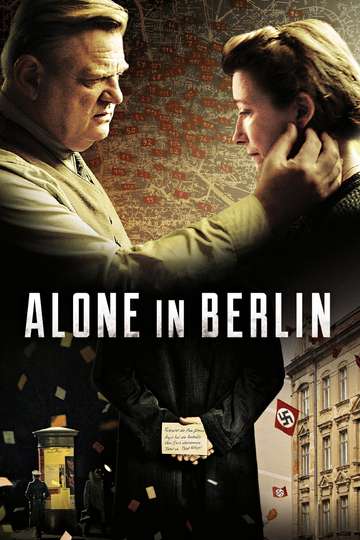 Want to watch 'Alone in Berlin' in the comfort of your own home? Discovering a streaming service to buy, rent, download, or view the Vincent Perez-directed movie via subscription can be challenging, so we here at Moviefone want to do the work for you.

Read on for a listing of streaming and cable services - including rental, purchase, and subscription alternatives - along with the availability of 'Alone in Berlin' on each platform. Now, before we get into all the details of how you can watch 'Alone in Berlin' right now, here are some particulars about the Pathé, Lipsync Productions, Master Movies, FilmWave, WS Film, Canal+, X Filme Creative Pool, Buffalo Films war flick.

Released January 13th, 2017, 'Alone in Berlin' stars Emma Thompson, Brendan Gleeson, Daniel Brühl, Mikael Persbrandt The R movie has a runtime of about 1 hr 43 min, and received a user score of 67 (out of 100) on TMDb, which put together reviews from 307 well-known users.

Want to know what the movie's about? Here's the plot: "Berlin in June of 1940. While Nazi propaganda celebrates the regime’s victory over France, a kitchen-cum-living room in Prenzlauer Berg is filled with grief. Anna and Otto Quangel’s son has been killed at the front. This working class couple had long believed in the ‘Führer’ and followed him willingly, but now they realise that his promises are nothing but lies and deceit. They begin writing postcards as a form of resistance and in a bid to raise awareness: Stop the war machine! Kill Hitler! Putting their lives at risk, they distribute these cards in the entrances of tenement buildings and in stairwells. But the SS and the Gestapo are soon onto them, and even their neighbours pose a threat."

The Remains of the Day
A rule bound head butler's world of manners and decorum in the househo...

Denial
Acclaimed writer and historian Deborah E. Lipstadt must battle for his...

Rush
A biographical drama centered on the rivalry between Formula 1 drivers...

The Zookeeper's Wife
The account of keepers of the Warsaw Zoo, Jan and Antonina Zabinski, w...