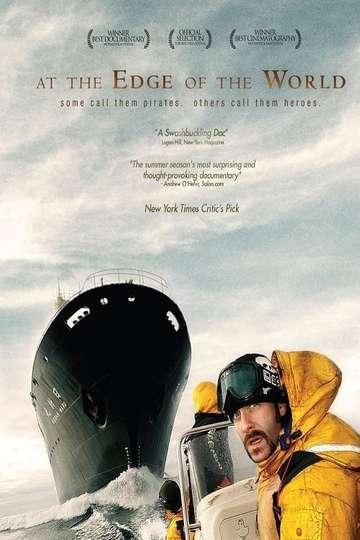 TMDb Score
67
PG 1 hr 37 minOct 3rd, 2008Documentary
At the Edge of the World chronicles the controversial Sea Shepherd Antarctic Campaign against a Japanese whaling fleet. The international volunteer crew, under-trained and under-equipped, develop a combination of bizarre and brilliant tactics with which to stop the whalers. But first they must find the Japanese ships, a far more difficult challenge than ever imagined - long-time activist Paul Watson and first-time captain Alex Cornelissen employ an array of strategies in the hopes of finding an elusive adversary in the vast expanse of the Ross Sea. With one ship (the Farley Mowat) too slow to chase down the whaling fleet, with their second ship (the Robert Hunter) unsuited for Antarctic ice conditions and with no country supporting their efforts to enforce international law, the situation becomes increasingly desperate. Against all odds, however, a real-life pirate tale unfolds - a modern-day "David vs. Goliath" adventure.
Show More
DirectorDan Stone
StarringPaul WatsonAlex Cornelisson
Full Cast & Crew

Original Language:English
Production Companies:Endeavour Media
At the Edge of the World on the Web:Official Website
Movie Tags:nature