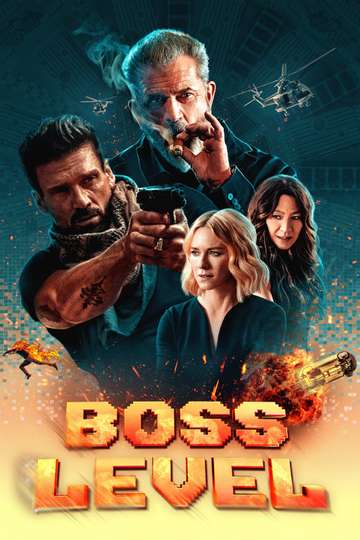 Looking to feast your eyes on 'Boss Level' on your TV, phone, or tablet? Hunting down a streaming service to buy, rent, download, or watch the Joe Carnahan-directed movie via subscription can be challenging, so we here at Moviefone want to take the pressure off.

Read on for a listing of streaming and cable services - including rental, purchase, and subscription choices - along with the availability of 'Boss Level' on each platform when they are available. Now, before we get into the fundamentals of how you can watch 'Boss Level' right now, here are some details about the Ingenious Media, Scott Free Productions, EFO Films, The Fyzz, Highland Film Group, River Bay Films, WarParty Films, Diamond Film Productions, Paradox Film Group, Big Red Films, Edver Films, Orca Entertainment Group science fiction flick.

Released March 5th, 2021, 'Boss Level' stars Frank Grillo, Mel Gibson, Naomi Watts, Annabelle Wallis The R movie has a runtime of about 1 hr 34 min, and received a user score of 69 (out of 100) on TMDb, which put together reviews from 1,196 knowledgeable users.

What, so now you want to know what the movie's about? Here's the plot: "Trapped in a time loop that constantly repeats the day of his murder, former special forces agent Roy Pulver (Frank Grillo) uncovers clues about a secret government project that could unlock the mystery behind his untimely death. In a race against the clock, Pulver must hunt down Colonel Ventor (Mel Gibson), the powerful head of the government program, while outrunning skilled ruthless assassins determined to keep him from the truth in order to break out of the loop, save his ex-wife (Naomi Watts) and live once again for tomorrow."

'Boss Level' is currently available to rent, purchase, or stream via subscription on Hulu, .

Fist of Fury
"Bruce Lee has done the impossible... ...HE'S SURPASSED HIMSELF!!!"

Mortal Kombat
"Get over here."
No One Lives
"No one runs. No one escapes."

Monster Hunter
"Behind our world, there is another."

The Little Things
"Some things never let us go."

Chaos Walking
"No one escapes the noise."

The East
"A war between duty and conscience."

Cosmic Sin
"First contact has been made. It's war."
City by the Sea
"When you're searching for a killer... the last suspect you want to see is your son."