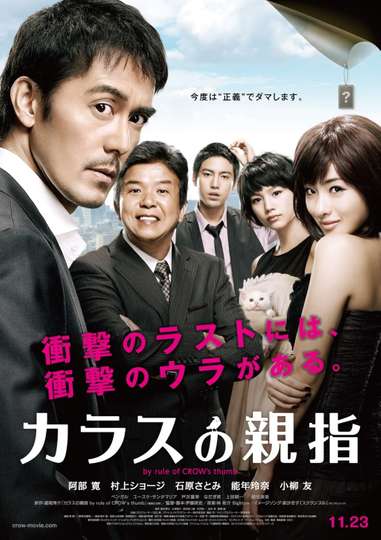 By Rule of Crow's Thumb

TMDb Score
64
NR 2 hr 40 minThriller, Drama, Comedy
Constantly on the run from a vicious loan shark, two small-time con artists, Take and Tetsu, plan their biggest and most complex con yet in order to get revenge and retire from a life of crime. However, things get complicated when they cross paths with Mahiro, a young woman that Take inadvertently orphaned during a job gone awry years ago. Seeing Mahiro down on her luck, Take tries to relieve his guilt by taking her on as a partner, while hiding his true identity. But as his plan unfolds, Take discovers that he isn't the only one with a secret.
Show More
DirectorTadafumi Ito
StarringHiroshi AbeSatomi IshiharaShôji Murakami
Full Cast & Crew