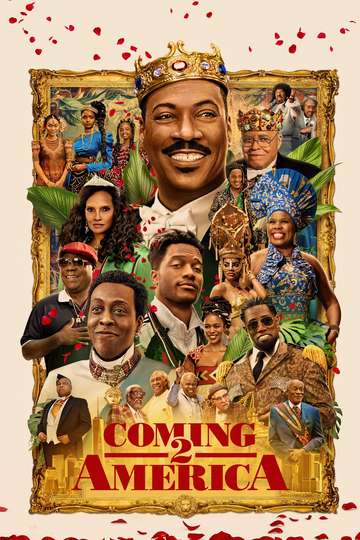 Want to watch 'Coming 2 America' on your TV or mobile device at home? Finding a streaming service to buy, rent, download, or view the Craig Brewer-directed movie via subscription can be a huge pain, so we here at Moviefone want to do right by you.

Below, you'll find a number of top-tier streaming and cable services - including rental, purchase, and subscription alternatives - along with the availability of 'Coming 2 America' on each platform when they are available. Now, before we get into the fundamentals of how you can watch 'Coming 2 America' right now, here are some finer points about the Paramount, Eddie Murphy Productions, Misher Films, New Republic Pictures comedy flick.

Released March 5th, 2021, 'Coming 2 America' stars Eddie Murphy, Arsenio Hall, Morgan Freeman, Jermaine Fowler The PG-13 movie has a runtime of about 1 hr 50 min, and received a user score of 66 (out of 100) on TMDb, which collated reviews from 1,830 knowledgeable users.

Want to know what the movie's about? Here's the plot: "Prince Akeem Joffer is set to become King of Zamunda when he discovers he has a son he never knew about in America – a street savvy Queens native named Lavelle. Honoring his royal father's dying wish to groom this son as the crown prince, Akeem and Semmi set off to America once again."

'Coming 2 America' is currently available to rent, purchase, or stream via subscription on Amazon Prime Video, .

Yes Day
"For 24 hours, kids make the rules."
I Wanna Be a Sailor
She Was an Acrobat's Daughter
Elvis
"The King lives on!"
Porky's Duck Hunt
Toy Boy
Get Rich Quick Porky
Coming to America
"The four funniest men in America are Eddie Murphy."

Raya and the Last Dragon
"A quest to save her world."
The Christmas Dream