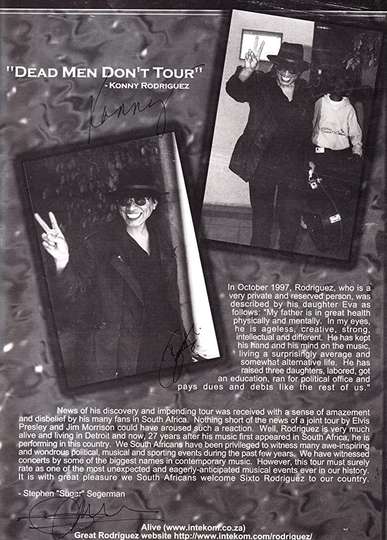 NR 52 minMusic
Directed by Tonia Selley, Dead Men Don't Tour was first broadcast on SABC 3 at 9.30pm on the 5th July 2001 just after 'Ripley's Believe Or Not'. This film features wonderful concert footage, backstage antics, interviews with Craig Bartholomew Strydom and Stephen "Sugar" Segerman, Rodriguez and his family, the promoters, the fans and the musicians. All live footage was filmed at the concerts in Pretoria, Durban and the Blues Room in Johannesburg.
Show More
DirectorTonia Selley
StarringRodriguezStephen SegermanCraig Bartholomew Strydom
Movie DetailsFull Cast & Crew