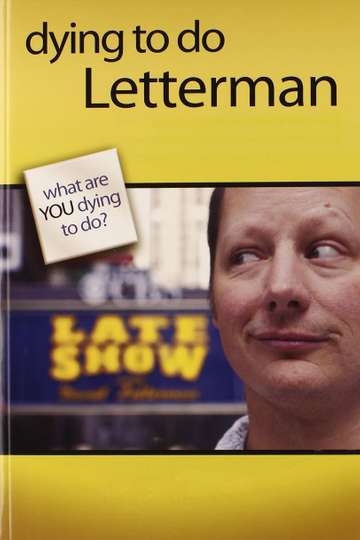 Dying to Do Letterman (2011)Stream and Watch Online

Fancy watching 'Dying to Do Letterman' on your TV or mobile device at home? Discovering a streaming service to buy, rent, download, or watch the Biagio Messina-directed movie via subscription can be challenging, so we here at Moviefone want to take the pressure off.

Below, you'll find a number of top-tier streaming and cable services - including rental, purchase, and subscription alternatives - along with the availability of 'Dying to Do Letterman' on each platform when they are available. Now, before we get into the nitty-gritty of how you can watch 'Dying to Do Letterman' right now, here are some details about the Joke Productions documentary flick.

Released March 4th, 2011, 'Dying to Do Letterman' stars Steve Mazan, Debbie Mazan, Jim Gaffigan, Kevin Nealon The movie has a runtime of about 1 hr 15 min, and received a user score of 60 (out of 100) on TMDb, which put together reviews from 1 well-known users.

Interested in knowing what the movie's about? Here's the plot: "When 35 year old stand-up comedian Steve Mazan learned he was dying of cancer, he dedicated the rest of his life to making his dream come true: performing comedy on The Late Show with David Letterman. This documentary chronicles his five-year journey, as he races his own ticking clock to achieve a nearly impossible goal. Hilarious and heart-breaking, Steve brings a brand-new perspective to living with cancer. This is a story that proves it's not how much time you have, it's what you do with it. As Steve says, 'If you stop chasing your dreams, you're already dead.'"

'Dying to Do Letterman' is currently available to rent, purchase, or stream via subscription on Apple iTunes, Amazon Video, Curiosity Stream, Vudu, and Kanopy .

'Dying to Do Letterman' Release Dates