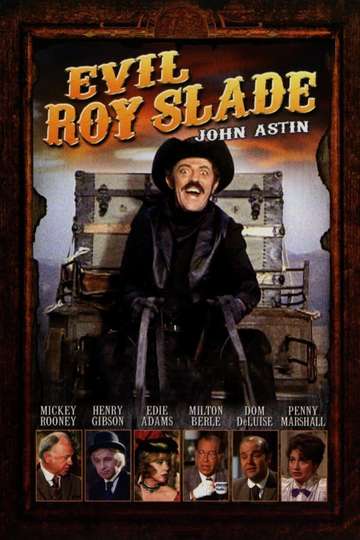 Looking to feast your eyes on 'Evil Roy Slade' in the comfort of your own home? Discovering a streaming service to buy, rent, download, or watch the Jerry Paris-directed movie via subscription can be challenging, so we here at Moviefone want to help you out.

Read on for a listing of streaming and cable services - including rental, purchase, and subscription options - along with the availability of 'Evil Roy Slade' on each platform when they are available. Now, before we get into the fundamentals of how you can watch 'Evil Roy Slade' right now, here are some finer points about the Universal Television comedy flick.

Released February 18th, 1972, 'Evil Roy Slade' stars John Astin, Milton Berle, Mickey Rooney, Henry Gibson The movie has a runtime of about 1 hr 37 min, and received a user score of 63 (out of 100) on TMDb, which assembled reviews from 12 experienced users.

Want to know what the movie's about? Here's the plot: "Orphaned and left in the desert as an infant, Evil Roy Slade (John Astin) grew up alone—save for his teddy bear—and mean. As an adult, he is notorious for being the "meanest villain in the West"—so he's thrown for quite a loop when he falls for sweet schoolteacher Betsy Potter (Pamela Austin). There's also Nelson L. Stool (Mickey Rooney), a railroad tycoon, who, along with his dimwitted nephew Clifford (Henry Gibson), is trying to get revenge on Evil Roy Slade for robbing him." .