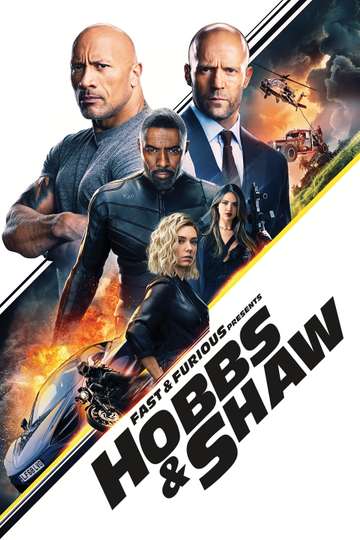 Yearning to watch 'Fast & Furious Presents: Hobbs & Shaw' on your TV, phone, or tablet? Finding a streaming service to buy, rent, download, or view the David Leitch-directed movie via subscription can be difficult, so we here at Moviefone want to help you out.

We've listed a number of streaming and cable services - including rental, purchase, and subscription options - along with the availability of 'Fast & Furious Presents: Hobbs & Shaw' on each platform when they are available. Now, before we get into all the details of how you can watch 'Fast & Furious Presents: Hobbs & Shaw' right now, here are some particulars about the Universal Pictures, Chris Morgan Productions, Seven Bucks Productions comedy flick.

Released August 2nd, 2019, 'Fast & Furious Presents: Hobbs & Shaw' stars Dwayne Johnson, Jason Statham, Idris Elba, Vanessa Kirby The PG-13 movie has a runtime of about 2 hr 17 min, and received a user score of 69 (out of 100) on TMDb, which compiled reviews from 5,820 experienced users.

What, so now you want to know what the movie's about? Here's the plot: "Ever since US Diplomatic Security Service Agent Hobbs and lawless outcast Shaw first faced off, they just have traded smack talk and body blows. But when cyber-genetically enhanced anarchist Brixton's ruthless actions threaten the future of humanity, they join forces to defeat him."

The Fast and the Furious: Tokyo Drift
"On the streets of Tokyo, speed needs no translation."

The Fate of the Furious
"Family no more."

Angel Has Fallen
"Loyalty is under fire"

Terminator: Dark Fate
"Welcome to the day after judgement day"

6 Underground
"They say no one can save the world. Meet no one."

Gemini Man
"Who will save you from yourself?"

The Lion King
"The King has Returned."
Silence Patton

Men in Black: International
"The universe is expanding"
Fast Five
"Get the fifth gear."