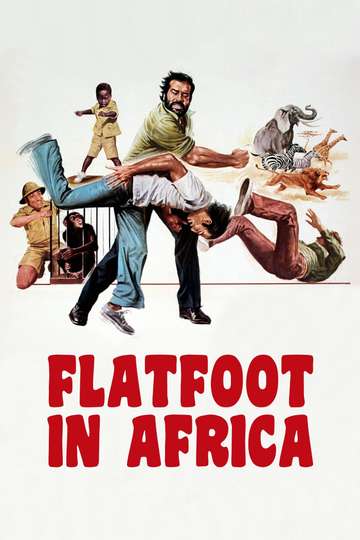 Want to watch 'Flatfoot in Africa' on your TV, phone, or tablet? Tracking down a streaming service to buy, rent, download, or view the Steno-directed movie via subscription can be a challenge, so we here at Moviefone want to do right by you.

Below, you'll find a number of top-tier streaming and cable services - including rental, purchase, and subscription options - along with the availability of 'Flatfoot in Africa' on each platform when they are available. Now, before we get into the nitty-gritty of how you can watch 'Flatfoot in Africa' right now, here are some finer points about the Laser Films, Rialto Film comedy flick.

Released June 23rd, 1978, 'Flatfoot in Africa' stars Bud Spencer, Enzo Cannavale, Werner Pochath, Joe Stewardson The movie has a runtime of about 1 hr 55 min, and received a user score of 62 (out of 100) on TMDb, which collated reviews from 131 experienced users.

You probably already know what the movie's about, but just in case... Here's the plot: "Inspector Rizzo in Napoli gets a message from a policeman from South Africa who wants to meet him. Immediately before this meeting the south African policeman is killed. Dying he shows Rizzo a picture of his little son Bodo. Rizzo travels to Johannesburg to find out what the policeman was working on and to find Bodo." .

Miami Supercops
I'm for the Hippopotamus
Why Did You Pick On Me?
Crime Busters
"Hill and Spencer! They're a pair of car-crashing, womanizing, rough-housing loudmouths... and they're the good guys!"
The Two Missionaries
Go for It
They Called Him Bulldozer
All the Way Boys
Banana Joe
Flatfoot in Hong Kong
Odds and Evens
"The most unlikely pair ever to take on the mob!"
The Knock Out Cop
"A one man demolition squad!"
Super Fuzz
"Dave Speed is saving the world from crime... but who is saving the world from Dave Speed?"
Watch Out, We're Mad
The Sheriff and the Satellite Kid
Flatfoot in Egypt
They Call Me Trinity
"Look out! Here comes Trinity..."
Double Trouble
Who Finds a Friend Finds a Treasure
Trinity Is Still My Name
"Trinity's back in the saddle again and still horsing around"
Even Angels Eat Beans
"Al Capone... Get lost! Dillinger... Phooey on you! Here come the funniest crooks since crime began!"