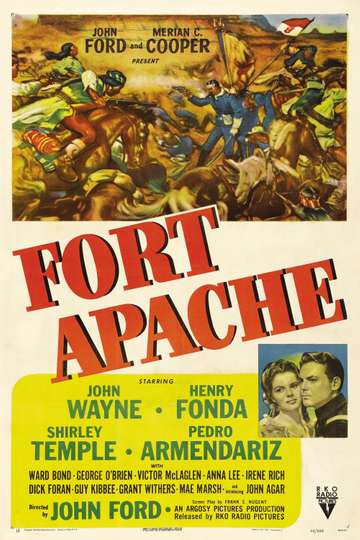 "John Ford's Masterpiece of the Frontier!"
TMDb Score
70
NR 2 hr 5 minJun 24th, 1948Western
In John Ford's sombre exploration of the mythology of American heroes, he slowly reveals the character of Owen Thursday, who sees his new posting to the desolate Fort Apache as a chance to claim the military honour which he believes is rightfully his. Arrogant, obsessed with military form and ultimately self-destructive, Thursday attempts to destroy the Apache chief Cochise after luring him across the border from Mexico, against the advice of his subordinates.
Show More
DirectorJohn Ford
StarringJohn WayneHenry FondaShirley Temple
Movie DetailsWhere to WatchFull Cast & CrewNews

The Cowboys
When his cattlemen abandon him for the gold fields, rancher Wil Anders...

3 Godfathers
Three outlaws on the run discover a dying woman and her baby. They swe...

The Quiet Man
An American man returns to the village of his birth in Ireland, where...