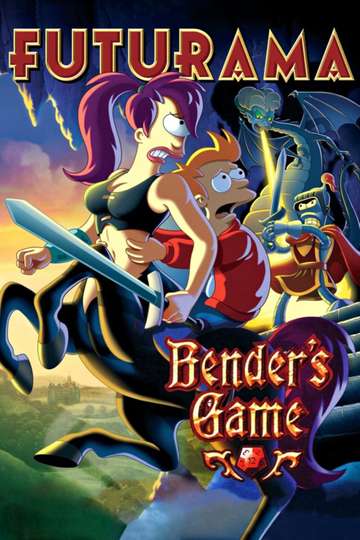 Want to behold the glory that is 'Futurama: Bender's Game' on your TV or mobile device at home? Tracking down a streaming service to buy, rent, download, or view the Dwayne Carey-Hill-directed movie via subscription can be confusing, so we here at Moviefone want to take the pressure off.

Read on for a listing of streaming and cable services - including rental, purchase, and subscription choices - along with the availability of 'Futurama: Bender's Game' on each platform when they are available. Now, before we get into all the details of how you can watch 'Futurama: Bender's Game' right now, here are some details about the 20th Century Fox Television, The Curiosity Company, Fox Television Animation tv movie flick.

Released November 4th, 2008, 'Futurama: Bender's Game' stars Billy West, Katey Sagal, John DiMaggio, Tress MacNeille The PG-13 movie has a runtime of about 1 hr 28 min, and received a user score of 69 (out of 100) on TMDb, which assembled reviews from 433 knowledgeable users.

Want to know what the movie's about? Here's the plot: "When Leela is insulted by a group of space-rednecks (like regular rednecks, but in space) she enters the Planet Express ship in a demolition derby. She emerges victorious, but when she brings the damaged ship home and the Professor sees the fuel gauge, he's enraged by the hit he's going to take at the Dark Matter pump. Now the crew have to find a way to break Mom's stranglehold on starship fuel, even if they have to wade through a Lord of the Rings-inspired fantasy-land to do it!" .

Austin Powers: The Spy Who Shagged Me
"First he fought for the Crown. Now he's fighting for the Family Jewels."

Wallace & Gromit: The Curse of the Were-Rabbit
"Something bunny is going on..."
Futurama: Into the Wild Green Yonder
"All the other galaxies will be green with envy!"

Monsters vs Aliens
"When aliens attack, monsters fight back."
Neon Genesis Evangelion: The End of Evangelion
"The fate of destruction is also the joy of rebirth"
What Women Want
"He has the power to hear everything women are thinking. Finally... a man is listening."

The Iron Giant
"It came from outer space!"
Stuart Little 2
"A Little goes a long way."
Futurama: The Beast with a Billion Backs
"Puts the "ick" in science ficktion!"

Flushed Away
"Someone's Going Down"

Austin Powers: International Man of Mystery
"If he were any cooler, he'd still be frozen, baby!"
South Park: Bigger, Longer & Uncut
"UH-OH."
Robin Hood
"Meet Robin Hood and his MERRY MENagerie!"
Futurama: Bender's Big Score
"Just when you thought it was safe to watch something else!"

Meet the Robinsons
"Think your family's weird?"
Ghost in the Shell
"It found a voice... Now it needs a body."
9
"When our world ended their mission began."