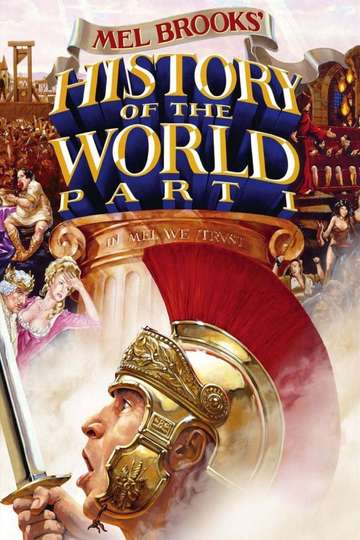 History of the World: Part I (1981)Stream and Watch Online

Looking to feast your eyes on 'History of the World: Part I' in the comfort of your own home? Finding a streaming service to buy, rent, download, or view the Mel Brooks-directed movie via subscription can be tricky, so we here at Moviefone want to help you out.

We've listed a number of streaming and cable services - including rental, purchase, and subscription alternatives - along with the availability of 'History of the World: Part I' on each platform when they are available. Now, before we get into all the details of how you can watch 'History of the World: Part I' right now, here are some particulars about the 20th Century Fox, Brooksfilms comedy flick.

Released June 12th, 1981, 'History of the World: Part I' stars Mel Brooks, Dom DeLuise, Madeline Kahn, Harvey Korman The R movie has a runtime of about 1 hr 32 min, and received a user score of 68 (out of 100) on TMDb, which compiled reviews from 639 well-known users.

Want to know what the movie's about? Here's the plot: "An uproarious version of history that proves nothing is sacred – not even the Roman Empire, the French Revolution and the Spanish Inquisition."

'History of the World: Part I' is currently available to rent, purchase, or stream via subscription on Apple iTunes, DIRECTV, Microsoft Store, Google Play Movies, Amazon Video, Vudu, Spectrum On Demand, and YouTube .

'History of the World: Part I' Release Dates

Spaceballs
"May the schwartz be with you."

A Fish Called Wanda
"A tale of murder, lust, greed, revenge, and seafood."
Time Bandits
"All the dreams you've ever had and not just the good ones."
The Jerk
"A rags to riches to rags story."
Monty Python and the Holy Grail
"And now! At Last! Another film completely different from some of the other films which aren't quite the same as this one is."
Caddyshack
"The snobs against the slobs!"
The Meaning of Life
"It took God six days to create the earth, and Monty Python just 90 minutes to screw it up."

Young Frankenstein
"The scariest comedy of all time!"
The Naked Gun 2½: The Smell of Fear
"If you see only one movie this year...you ought to get out more often"
Blazing Saddles
"Never give a saga an even break!"

Dave
"In a country where anybody can become President, anybody just did."
High Anxiety
"The Master of Comedy takes on The Master of Suspense!"

Billy Madison
"Billy is going back to school... Way back."
Robin Hood: Men in Tights
"The legend had it coming..."
Airplane II: The Sequel
"For the ride of your life... All you need for Christmas are your two front seats!"
A League of Their Own
"To achieve the incredible, you have to attempt the impossible."
The Producers
"Hollywood Never Faced a Zanier Zero Hour!"
To Be or Not to Be
"That is the movie!"
Dracula: Dead and Loving It
"Got Blood?"

The Blues Brothers
"They're on a mission from God."