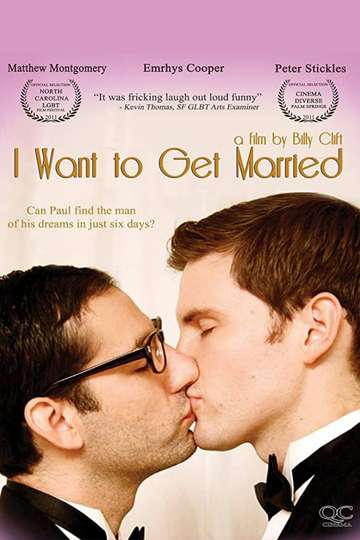 I Want to Get Married (2011)Stream and Watch Online

Need to watch 'I Want to Get Married' in the comfort of your own home? Searching for a streaming service to buy, rent, download, or view the William Clift-directed movie via subscription can be difficult, so we here at Moviefone want to do right by you.

Read on for a listing of streaming and cable services - including rental, purchase, and subscription options - along with the availability of 'I Want to Get Married' on each platform when they are available. Now, before we get into all the details of how you can watch 'I Want to Get Married' right now, here are some details about the romance flick.

Released September 21st, 2011, 'I Want to Get Married' stars Matthew Montgomery, Ashleigh Sumner, Emrhys Cooper, Jane Wiedlin The movie has a runtime of about 1 hr 47 min, and received a user score of 51 (out of 100) on TMDb, which put together reviews from 7 experienced users.

Want to know what the movie's about? Here's the plot: "Paul Roll is a lovable nerd who's achieved everything he's set his mind to, except...he's never been successful at finding a man. After witnessing the marriage of his best friends--6 days before Election Day 2008--he realizes he desperately wants to get married. Forced by the current economy to take on an ultra-conservative (and anti-gay) conglomerate known as The Family as a new client, Paul must now tangle head-to-head with its Disney-like villain, Miss Deborah Anderson. Through a series of comedic mishaps that include a crusty old lounge singer named Miss Piggy B, Paul finally meets the man of his dreams. But is true love meant to be?"

'I Want to Get Married' is currently available to rent, purchase, or stream via subscription on Hoopla, Tubi TV, and The Roku Channel .

'I Want to Get Married' Release Dates

The King's Daughter
"What on Earth can hold more power than a king?"