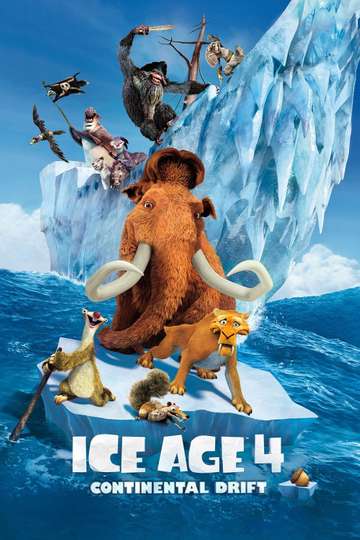 Need to watch 'Ice Age: Continental Drift' in the comfort of your own home? Searching for a streaming service to buy, rent, download, or watch the Steve Martino-directed movie via subscription can be a challenge, so we here at Moviefone want to do right by you.

Read on for a listing of streaming and cable services - including rental, purchase, and subscription choices - along with the availability of 'Ice Age: Continental Drift' on each platform when they are available. Now, before we get into the various whats and wheres of how you can watch 'Ice Age: Continental Drift' right now, here are some details about the 20th Century Fox, Blue Sky Studios, 20th Century Fox Animation comedy flick.

Released July 13th, 2012, 'Ice Age: Continental Drift' stars Ray Romano, John Leguizamo, Denis Leary, Seann William Scott The PG movie has a runtime of about 1 hr 28 min, and received a user score of 63 (out of 100) on TMDb, which put together reviews from 6,494 respected users.

Interested in knowing what the movie's about? Here's the plot: "Manny, Diego, and Sid embark upon another adventure after their continent is set adrift. Using an iceberg as a ship, they encounter sea creatures and battle pirates as they explore a new world."

Shrek Forever After
"It ain't Ogre... Til it's Ogre"
Kung Fu Panda
"Prepare for awesomeness."

Shrek the Third
"He’s in for the Royal Treatment."
Madagascar: Escape 2 Africa
"Still together. Still lost!"
Kung Fu Panda 2
"Prepare for the Year of Awesomeness!"

Hotel Transylvania
"Even monsters need a vacation"
Rio
"1 out of every 8 Americans is afraid of flying. Most of them don't have feathers."
Tangled
"They're taking adventure to new lengths."

Madagascar 3: Europe's Most Wanted
"They Have One Shot to Get Back Home."

Madagascar
"Someone’s got a zoo loose."

Wreck-It Ralph
"The story of a regular guy just looking for a little wreck-ognition."
Cars 2
"Ka-ciao!"