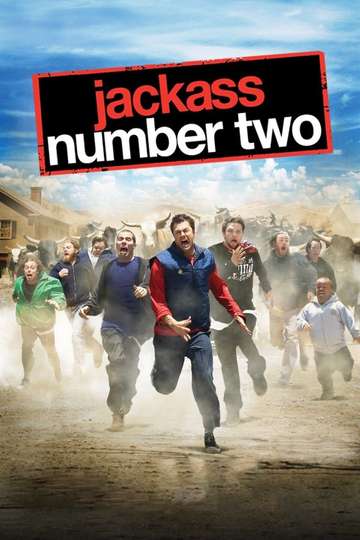 Need to watch 'Jackass Number Two' in the comfort of your own home? Tracking down a streaming service to buy, rent, download, or view the Jeff Tremaine-directed movie via subscription can be a challenge, so we here at Moviefone want to do the work for you.

We've listed a number of streaming and cable services - including rental, purchase, and subscription options - along with the availability of 'Jackass Number Two' on each platform when they are available. Now, before we get into all the details of how you can watch 'Jackass Number Two' right now, here are some details about the Paramount, MTV Films, Dickhouse Productions, Lynch Siderow Productions action flick.

Released September 22nd, 2006, 'Jackass Number Two' stars Johnny Knoxville, Bam Margera, Steve-O, Chris Pontius The R movie has a runtime of about 1 hr 32 min, and received a user score of 65 (out of 100) on TMDb, which compiled reviews from 892 experienced users.

Interested in knowing what the movie's about? Here's the plot: "Jackass Number Two is a compilation of various stunts, pranks and skits, and essentially has no plot. Chris Pontius, Johnny Knoxville, Steve-O, Bam Margera, and the whole crew return to the screen to raise the stakes higher than ever before."

Jackass Volume One
Hiccups
One-Eyed Jacks
"The motion picture that starts its own tradition of greatness."
Jackass 3.5
"Warning: The stunts in this movie were performed by professionals, so neither you or your dumb little buddies should attempt anything from this movie."

Jackass 3D
"3 Times the Laughs. 3 Times the Stupid. 3 Times the Pain."
Jackass Volume Two
Second Life
"We are only entitled to one life, why not two?"
Jackass 2.5
"All the stuff we couldn't pack into number two."
Jackass Presents: Bad Grandpa .5

Jackass: The Movie
"Do not attempt this at home."
Bugged
Sayonara
""I am not allowed to love. But I will love you if that is your desire...""
Spinning

10 Sitcom Pilots Inspired by Real People: Which Will You Watch?