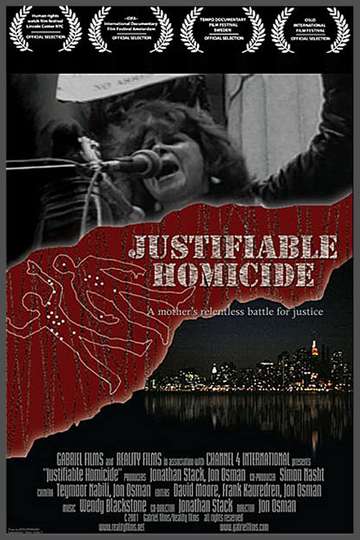 Yearning to watch 'Justifiable Homicide' in the comfort of your own home? Discovering a streaming service to buy, rent, download, or watch the Jon Osman-directed movie via subscription can be confusing, so we here at Moviefone want to do the work for you.

We've listed a number of streaming and cable services - including rental, purchase, and subscription choices - along with the availability of 'Justifiable Homicide' on each platform. Now, before we get into the various whats and wheres of how you can watch 'Justifiable Homicide' right now, here are some finer points about the Reality, Channel Four Films documentary flick.

Released , 'Justifiable Homicide' stars Rudolph Giuliani The movie has a runtime of about 1 hr 25 min, and received a user score of (out of 100) on TMDb, which assembled reviews from well-known users.

Want to know what the movie's about? Here's the plot: "In 1995 three Puerto Rican teenagers enter an apartment where they are shot many times by plain clothes NYPD officers. Two of the teenagers die and one is wounded. The officers claim the men had come to rob the tenants of the apartment but one of the boy's mothers investigates the shooting after the Grand Jury find everything was fine. The Civilian Compliant Review Board CCRB also pick up her complaint and find proof of a shoddy investigation, over-looked facts and an attempt to cover up anything that would make the NYPD look bad that goes the whole way to Mayor Giuliani himself."

'Justifiable Homicide' is currently available to rent, purchase, or stream via subscription on Amazon Video .