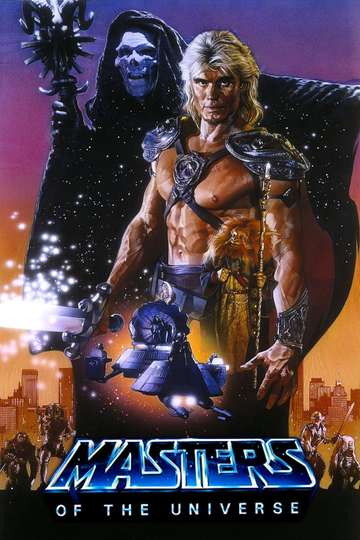 Masters of the Universe (1987)Stream and Watch Online

Yearning to watch 'Masters of the Universe' on your TV, phone, or tablet? Searching for a streaming service to buy, rent, download, or watch the Gary Goddard-directed movie via subscription can be difficult, so we here at Moviefone want to help you out.

We've listed a number of streaming and cable services - including rental, purchase, and subscription alternatives - along with the availability of 'Masters of the Universe' on each platform when they are available. Now, before we get into the nitty-gritty of how you can watch 'Masters of the Universe' right now, here are some finer points about the Cannon Group, Pressman Film, Golan-Globus Productions adventure flick.

Released August 7th, 1987, 'Masters of the Universe' stars Dolph Lundgren, Frank Langella, Meg Foster, Billy Barty The PG movie has a runtime of about 1 hr 46 min, and received a user score of 57 (out of 100) on TMDb, which assembled reviews from 723 well-known users.

Want to know what the movie's about? Here's the plot: "The world of Eternia in the aftermath of Skeletor's war on Castle Grayskull, which he has won after seizing Grayskull and the surrounding city using a cosmic key developed by the locksmith Gwildor. The Sorceress is now Skeletor's prisoner and he begins to drain her life-force as he waits for the moon of Eternia to align with the Great Eye of the Universe that will bestow god-like power upon him."

'Masters of the Universe' is currently available to rent, purchase, or stream via subscription on Hoopla, Kanopy, Tubi TV, Pluto TV, and Amazon Prime Video .

'Masters of the Universe' Release Dates

Last Action Hero
"This isn't the movies anymore."
The Adventures of Buckaroo Banzai Across the 8th Dimension
"Beings from Another Dimension have invaded your world."
Kindergarten Cop
"Go ahead, you tell him you didn't do your homework."
Short Circuit 2
"The adventures of America's most electric leading man continue."
Superman II
"The Man of Steel meets his match!"
King Solomon's Mines
"An action packed adventure, full of laughs and heroics."
Superman IV: The Quest for Peace
"Nuclear Power. In the best hands, it is dangerous. In the hands of Lex Luthor, it is pure evil. This is Superman's greatest battle. And it is for all of us."
3 Men and a Little Lady
Timecop
"Turn back the clock and you're history."
Flash Gordon
"He'll save every one of us!"
Short Circuit
"Something wonderful has happened... No. 5 is alive!"
3 Men and a Baby
"They changed her diapers. She changed their lives."
Cyborg
"He's the First Hero of the 21st Century... And He's Our Only Hope."
Kickboxer
"An Ancient Sport Becomes A Deadly Game."
Krull
"A world light-years beyond your imagination."
Bill & Ted's Excellent Adventure
"History is about to be rewritten by two guys who can't spell."
The Last Starfighter
"He didn't find his dreams... his dreams found him."
Superman III
"If the world's most powerful computer can control even Superman...no one on earth is safe."
Howard the Duck
"You will believe that a duck can talk."
Bloodsport
"The true story of an American ninja."
Crocodile Dundee
"There's a little of him in all of us."