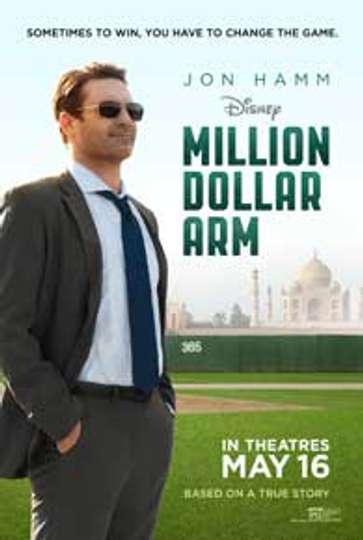 Want to watch 'Million Dollar Arm' in the comfort of your own home? Tracking down a streaming service to buy, rent, download, or watch the Craig Gillespie-directed movie via subscription can be difficult, so we here at Moviefone want to do the heavy lifting.

Read on for a listing of streaming and cable services - including rental, purchase, and subscription alternatives - along with the availability of 'Million Dollar Arm' on each platform when they are available. Now, before we get into the fundamentals of how you can watch 'Million Dollar Arm' right now, here are some specifics about the Walt Disney Pictures, Roth Films, Mayhem Pictures drama flick.

Released May 16th, 2014, 'Million Dollar Arm' stars Jon Hamm, Bill Paxton, Lake Bell, Suraj Sharma The PG movie has a runtime of about 2 hr 4 min, and received a user score of 68 (out of 100) on TMDb, which put together reviews from 521 well-known users.

Curious to know what the movie's about? Here's the plot: "In a last-ditch effort to save his career, sports agent JB Bernstein dreams up a wild game plan to find Major League Baseball’s next great pitcher from a pool of cricket players in India. He soon discovers two young men who can throw a fastball but know nothing about the game of baseball. Or America. It’s an incredible and touching journey that will change them all — especially JB, who learns valuable lessons about teamwork, commitment and family."

When the Game Stands Tall