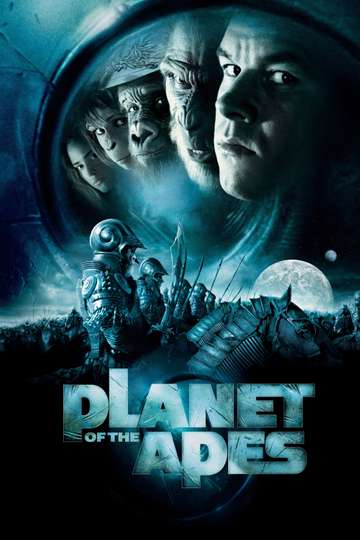 Planet of the Apes (2001)Stream and Watch Online

Want to watch 'Planet of the Apes' on your TV, phone, or tablet? Hunting down a streaming service to buy, rent, download, or watch the Tim Burton-directed movie via subscription can be a huge pain, so we here at Moviefone want to help you out.

We've listed a number of streaming and cable services - including rental, purchase, and subscription choices - along with the availability of 'Planet of the Apes' on each platform when they are available. Now, before we get into the fundamentals of how you can watch 'Planet of the Apes' right now, here are some particulars about the Tim Burton Productions, 20th Century Fox, The Zanuck Company adventure flick.

Want to know what the movie's about? Here's the plot: "After a spectacular crash-landing on an uncharted planet, brash astronaut Leo Davidson finds himself trapped in a savage world where talking apes dominate the human race. Desperate to find a way home, Leo must evade the invincible gorilla army led by Ruthless General Thade."

'Planet of the Apes' Release Dates

War of the Worlds
"They're already here."

The Happening
"We've Sensed It. We've Seen The Signs. Now... It's Happening."
Godzilla
"Size does matter."
Goosebumps: It Came from Beneath the Kitchen Sink
"It's warm.. it's breathing.. and it doesn't do dishes!"
Mars Attacks!
"Nice planet. We'll take it!"
Conquest of the Planet of the Apes
"All new! The revolt of the apes. The most awesome spectacle in the annals of science fiction!"

Superman Returns
"You’ll Believe A Man Can Fly Again!"
Sleepy Hollow
"Heads will roll."
Wild Wild West
"It's a whole new west."
Planet of the Apes
"Somewhere in the Universe, there must be something better than man!"
Alien Resurrection
"It's already too late."