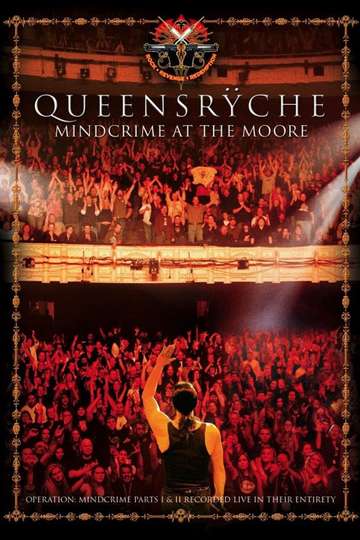 "The Moore Theatre in Seattle, USA in October 2006"
TMDb Score
90
NR 2 hr 30 minJul 3rd, 2007Music
Mindcrime at the Moore is a live album and DVD by American progressive metal band Queensrÿche, that was released on July 3, 2007. The album/DVD was recorded live during Queensrÿche's three night stint at The Moore Theatre in Seattle in October 2006, on the band's tour in support of Operation: Mindcrime II. The group performed that album and 1988's Operation: Mindcrime in their entirety, supported by a cast of actors and by the Seattle Seahawks Drumline. Also included on the DVD is a tour documentary, a piece on the band’s "Rock & Ride Across America" charity motorcycle ride for the VH1 Save The Music Foundation, and a live performance of "The Chase" from the Gibson Amphitheatre in Los Angeles, featuring Ronnie James Dio's only public appearance as Dr. X. The DVD live concert was edited by Scott C. Wilson.
Show More
StarringGeoff TateMichael WiltonEddie Jackson
Full Cast & Crew

2:12'Secrets in the Water' Trailer

2:01'The Harder They Fall' Trailer

1:54'Convergence: Courage in a Crisis' Trailer