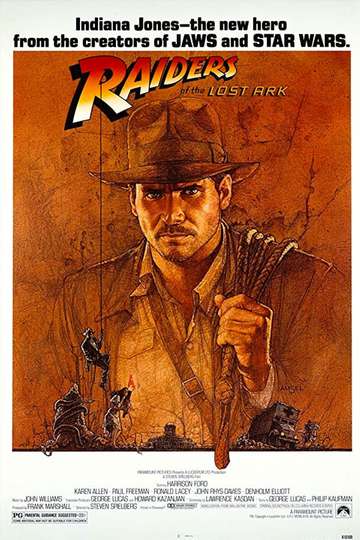 Raiders of the Lost Ark (1981)Stream and Watch Online

Want to watch 'Raiders of the Lost Ark' on your TV or mobile device at home? Tracking down a streaming service to buy, rent, download, or watch the Steven Spielberg-directed movie via subscription can be tricky, so we here at Moviefone want to do the work for you.

We've listed a number of streaming and cable services - including rental, purchase, and subscription alternatives - along with the availability of 'Raiders of the Lost Ark' on each platform when they are available. Now, before we get into the nitty-gritty of how you can watch 'Raiders of the Lost Ark' right now, here are some specifics about the Lucasfilm Ltd., Paramount action flick.

What, so now you want to know what the movie's about? Here's the plot: "When Dr. Indiana Jones – the tweed-suited professor who just happens to be a celebrated archaeologist – is hired by the government to locate the legendary Ark of the Covenant, he finds himself up against the entire Nazi regime."

Indiana Jones and the Temple of Doom
"If adventure has a name... it must be Indiana Jones."

Gladiator
"A Hero Will Rise."
Back to the Future Part II
"Roads? Where we're going, we don't need roads!"
Back to the Future
"He's the only kid ever to get into trouble before he was born."
Jurassic Park
"An adventure 65 million years in the making."

Terminator 2: Judgment Day
"It's nothing personal."

Braveheart
"Every man dies. Not every man truly lives."
Men in Black
"Protecting the Earth from the scum of the universe."
Star Wars: Episode II - Attack of the Clones
"A Jedi Shall Not Know Anger. Nor Hatred. Nor Love."
Return of the Jedi
"The Empire Falls..."

Star Wars: Episode I - The Phantom Menace
"Every generation has a legend. Every journey has a first step. Every saga has a beginning."
Die Hard
"Forty stories. Twelve terrorists. One cop."
Indiana Jones and the Last Crusade
"The man with the hat is back. And this time, he's bringing his Dad."
Aliens
"This time it's war."

Casino Royale
"Everyone has a past. Every legend has a beginning."
Star Wars
"A long time ago in a galaxy far, far away..."

Indiana Jones and the Kingdom of the Crystal Skull
"The adventure continues . . ."

The Empire Strikes Back
"The Adventure Continues..."

Alien
"In space no one can hear you scream."

The Terminator
"Your future is in its hands."