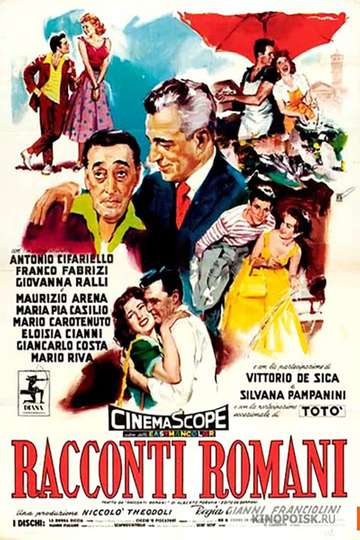 Fancy watching 'Roman Tales' on your TV or mobile device at home? Tracking down a streaming service to buy, rent, download, or view the Gianni Franciolini-directed movie via subscription can be a challenge, so we here at Moviefone want to help you out.

Read on for a listing of streaming and cable services - including rental, purchase, and subscription choices - along with the availability of 'Roman Tales' on each platform when they are available. Now, before we get into the various whats and wheres of how you can watch 'Roman Tales' right now, here are some specifics about the Cormoran Films comedy flick.

Released , 'Roman Tales' stars Antonio Cifariello, Franco Fabrizi, Giovanna Ralli, Maurizio Arena The movie has a runtime of about 1 hr 37 min, and received a user score of 63 (out of 100) on TMDb, which compiled reviews from 7 respected users.

You probably already know what the movie's about, but just in case... Here's the plot: "Alvaro is been in jail and so he consider himself the most fit to lead his three friends Mario, Otello and Spartaco. The four young men decide to start a business. They need only a van to start a transport company. But they lack the money. How can they get it?"

'Roman Tales' is currently available to rent, purchase, or stream via subscription on Amazon Video, .