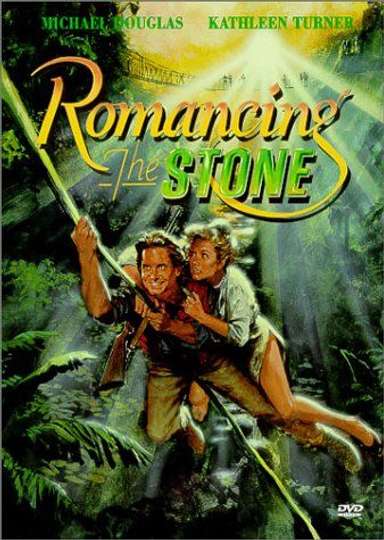 Need to watch 'Romancing the Stone' on your TV, phone, or tablet? Discovering a streaming service to buy, rent, download, or watch the Robert Zemeckis-directed movie via subscription can be confusing, so we here at Moviefone want to do the heavy lifting.

Read on for a listing of streaming and cable services - including rental, purchase, and subscription options - along with the availability of 'Romancing the Stone' on each platform when they are available. Now, before we get into the nitty-gritty of how you can watch 'Romancing the Stone' right now, here are some details about the 20th Century Fox, SLM Production Group, Nina Saxon Film Design, El Corazon Producciones S.A. adventure flick.

Released March 30th, 1984, 'Romancing the Stone' stars Michael Douglas, Kathleen Turner, Danny DeVito, Zack Norman The PG movie has a runtime of about 1 hr 46 min, and received a user score of 67 (out of 100) on TMDb, which compiled reviews from 1,447 knowledgeable users.

What, so now you want to know what the movie's about? Here's the plot: "Though she can spin wild tales of passionate romance, novelist Joan Wilder has no life of her own. Then one day adventure comes her way in the form of a mysterious package. It turns out that the parcel is the ransom she'll need to free her abducted sister, so Joan flies to South America to hand it over. But she gets on the wrong bus and winds up hopelessly stranded in the jungle."

Lethal Weapon 2
"The magic is back!"
The Running Man
"2019. A game nobody survives. This year might be the exception."
The Hunt for Red October
"Invisible. Silent. Stolen."
Tango & Cash
"Two of L.A.'s top rival cops are going to have to work together... Even if it kills them."
The War of the Roses
"Once in a lifetime comes a motion picture that makes you feel like falling in love all over again. This is not that movie."
The Jewel of the Nile
"They're back again...and romancing a brand new stone."
The Golden Child
"Eddie Murphy is the chosen one."
Big Trouble in Little China
"Adventure doesn't come any bigger!"
Robin Hood: Prince of Thieves
"Sometimes the only way to uphold justice... is to break the law."

Willow
"Adventure doesn't come any bigger than this."

Working Girl
"For anyone who's ever won. For anyone who's ever lost. And for everyone who's still in there trying."
48 Hrs.
"One Cop. One Con. No Mercy."
Crocodile Dundee
"There's a little of him in all of us."
Highlander
"There can be only one."
Splash
"Allen Bauer Thought He'd Never Find The Right Woman... He Was Only Half Wrong!"
King Solomon's Mines
"An action packed adventure, full of laughs and heroics."
Beverly Hills Cop
"The Heat Is On!"
Lethal Weapon 3
"The magic is back again!"
True Lies
"When he said I do, he never said what he did."
Fatal Attraction
"A look that led to an evening. A mistake he'll regret... FOR THE REST OF HIS LIFE."
Cocoon
"Beyond the innocence of youth, and the wisdom of age, lies the wonder of... Cocoon"