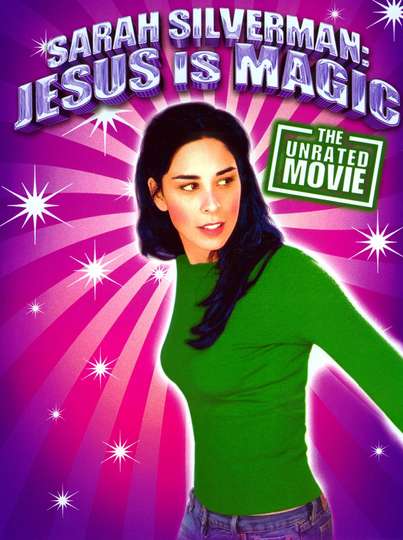 Fancy watching 'Sarah Silverman: Jesus Is Magic' in the comfort of your own home? Searching for a streaming service to buy, rent, download, or watch the Liam Lynch-directed movie via subscription can be tricky, so we here at Moviefone want to do the heavy lifting.

We've listed a number of streaming and cable services - including rental, purchase, and subscription alternatives - along with the availability of 'Sarah Silverman: Jesus Is Magic' on each platform when they are available. Now, before we get into the various whats and wheres of how you can watch 'Sarah Silverman: Jesus Is Magic' right now, here are some finer points about the Black Gold Films (II) comedy flick.

Released February 11th, 2005, 'Sarah Silverman: Jesus Is Magic' stars Sarah Silverman, Steve Agee, Brian Posehn, Jim Bodma The movie has a runtime of about 1 hr 10 min, and received a user score of 63 (out of 100) on TMDb, which assembled reviews from 66 well-known users.

Interested in knowing what the movie's about? Here's the plot: "Sarah Silverman appears before an audience in Los Angeles with several sketches, taped outside the theater, intercut into the stand-up performance. Themes include race, sex, and religion. Her comic persona is a self-centered hipster, brash and clueless about her political incorrectness. A handful of musical numbers punctuate the performance." .

Miranda Sings Live... Your Welcome
"Get ready to have your minds freakin' blown"
The Brady Girls Get Married
Back to the Well: 'Clerks II'
Dana Carvey: Straight White Male, 60

Strangers with Candy
"Going to high school for the first time is always scary... Especially the second time around."
Sarah Silverman: We Are Miracles
Kathy Griffin: A Hell of a Story
Serial Mom
"Every Mom Wants to Be Wanted, But Not For Murder!"
To Be Takei
"A star’s trek for life, liberty, and love."
Sundance Skippy
The Brady Bunch in the White House
A Very Brady Sequel
"The more everything changes the more they stay the same."
Public Speaking
Transparent: Musicale Finale
Living with Michael Jackson: A Tonight Special
Freaks and Geeks: The Documentary
The Six Degrees of Helter Skelter
"Enter the demented mind of Charles Manson."
The Brady Bunch Movie
"They're back to save America from the '90s."
Live in Front of a Studio Audience: Norman Lear's "All in the Family" and "The Jeffersons"
A Very Brady Christmas
Transformer

Sarah Silverman Admits Blackface Scene Got Her Fired From Movie