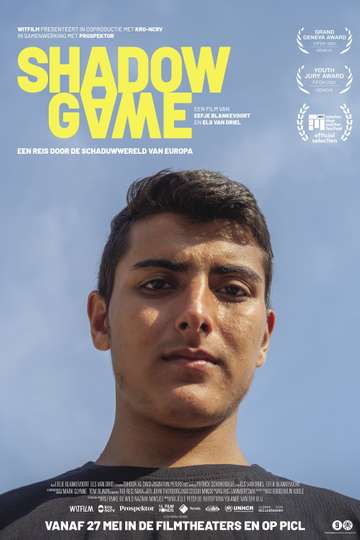 "Journey trough the dark side of Europe"
TMDb Score
68
NR 1 hr 30 minDocumentary
Shadow Game is an experimentally filmed account of the far-reaching consequences of European asylum policy. Now fences have gone up all over Europe, seeking asylum has become almost impossible. The teenagers cross snowy landscapes and meet aggressive border police on their way. Reaching their final destination has become more difficult than ever. Their journey takes them through the whole of Europe: from Greece to North Macedonia, Serbia and Bosnia and Herzegovina, from Italy to France and The Netherlands. The film was shot over a period of three years, partly by the main characters themselves on their phones.
Show More
DirectorsEefje BlankevoortEls van Driel

Pat & Mat: Baking and Grilling!
Pat & Mat again cause a lot of chaos in their new adventure Pat & Mat:...

I Don't Wanna Dance
An aspiring teenage dancer finds himself torn between his increasingly...

Handsome
Two brothers embark on a worldwide journey to discover what it's like...

Yakuza Princess
In Brazil, Akemi finds out that she's the heiress to the Yakuza empire...

Prisoners of the Ghostland
In the treacherous frontier city of Samurai Town, a ruthless bank robb...