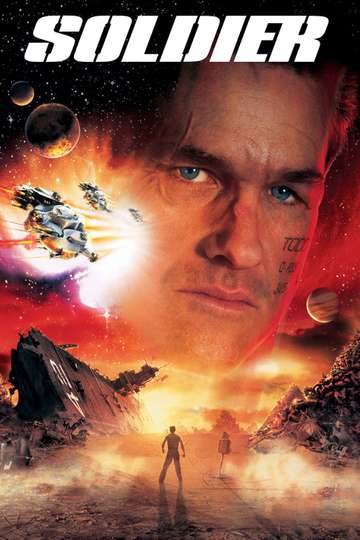 Want to watch 'Soldier' on your TV, phone, or tablet? Finding a streaming service to buy, rent, download, or view the Paul W. S. Anderson-directed movie via subscription can be a huge pain, so we here at Moviefone want to do the heavy lifting.

We've listed a number of streaming and cable services - including rental, purchase, and subscription options - along with the availability of 'Soldier' on each platform when they are available. Now, before we get into the nitty-gritty of how you can watch 'Soldier' right now, here are some specifics about the Warner Bros. Pictures, Impact Pictures, Jerry Weintraub Productions, Morgan Creek Productions action flick.

Released October 23rd, 1998, 'Soldier' stars Kurt Russell, Jason Scott Lee, Jason Isaacs, Connie Nielsen The R movie has a runtime of about 1 hr 39 min, and received a user score of 64 (out of 100) on TMDb, which compiled reviews from 660 respected users.

Want to know what the movie's about? Here's the plot: "Sergeant Todd is a veteran soldier for an elite group of the armed forces. After being defeated by a new breed of genetically engineered soldiers, he is dumped on a waste planet and left for dead. He soon interacts with a group of crash survivors who lead out a peaceful existence. The peace is broken as the new soldiers land on the planet to eliminate the colony, which Sergeant Todd must defend."

Executive Decision
"Fasten your seat belts"
Deep Impact
"Oceans Rise. Cities Fall. Hope survives."
Hard Target
"Don't hunt what you can't kill."
Escape from L.A.
"Snake is back."
Predator 2
"Silent. Invisible. Invincible. He’s in town with a few days to kill."
Breakdown
"It could happen to you."
The Peacemaker
"How do you get the world's attention?"
Judge Dredd
"In the future, one man is the law."
Event Horizon
"Infinite Space - Infinite Terror"
Assassins
"In the shadows of life. In the business of death. One man found a reason to live."
Backdraft
"Silently behind a door, it waits."
Sphere
"A thousand feet beneath the sea, the blackest holes are in the mind..."
Battlefield Earth
"Take Back The Planet"
Timecop
"Turn back the clock and you're history."
Maverick
"In their hands, a deck of cards was the only thing more dangerous than a gun."
Mercury Rising
"Someone knows too much."
Romeo Must Die
"In the city ruled by criminals, two families have forgotten their fear. He will make them remember."
Repo Men
"For a price, any organ in your body can be replaced. But it can also be repossessed."
Universal Soldier
"The future has a bad attitude."
The 6th Day
"They picked the wrong man to clone."
The Animal
"He wasn't much of a man... Now he's not much of an animal!"

The 'Doogie Kameāloha, M.D.' cast talks about the new series