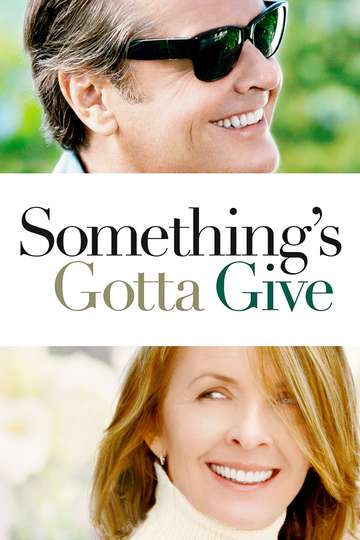 Yearning to watch 'Something's Gotta Give' on your TV, phone, or tablet? Hunting down a streaming service to buy, rent, download, or view the Nancy Meyers-directed movie via subscription can be difficult, so we here at Moviefone want to help you out.

We've listed a number of streaming and cable services - including rental, purchase, and subscription choices - along with the availability of 'Something's Gotta Give' on each platform when they are available. Now, before we get into all the details of how you can watch 'Something's Gotta Give' right now, here are some specifics about the Columbia Pictures, Warner Bros. Pictures, Waverly Films romance flick.

Released December 12th, 2003, 'Something's Gotta Give' stars Jack Nicholson, Diane Keaton, Keanu Reeves, Frances McDormand The PG-13 movie has a runtime of about 2 hr 8 min, and received a user score of 66 (out of 100) on TMDb, which put together reviews from 1,317 top users.

You probably already know what the movie's about, but just in case... Here's the plot: "Harry Sanborn is an aged music industry exec with a fondness for younger women like Marin, his latest trophy girlfriend. Things get a little awkward when Harry suffers a heart attack at the home of Marin's mother, Erica. Left in the care of Erica and his doctor, a love triangle starts to take shape."

The Night Porter
"The Most Controversial Picture of Our Time!"
Murder-Rock: Dancing Death
"Save the last dance... for hell!"
Where the Red Fern Grows
Doula
Warning Sign

The Family Stone
"Feel The Love"
Cyborg Cop II
"Get ready for war."
Miss Willoughby and the Haunted Bookshop
Cyborg Cop
"Programmed to kill... He is unstoppable."
Jayeshbhai Jordaar

It's Complicated
"First comes marriage. Then comes divorce. And then..."
Hanging Up
"Every family has a few hang-ups."
June Again
"A mother's love is unforgettable."
Sweet November
"She Just Needed A Month To Change His Life Forever."
Project Nim
"The world will be a different place once you've seen it through his eyes."
The Shark Hunter
As Good as It Gets
"A comedy from the heart that goes for the throat."
City of Angels
"She didn't believe in angels until she fell in love with one."
Thrashin'
"It's not a kid's game anymore."
Foxes
"Daring to do it!"
Prime Cut
"Any way they slice it, it’s going to be murder"

15 Things You Never Knew About 'Batman' on its 30th Anniversary