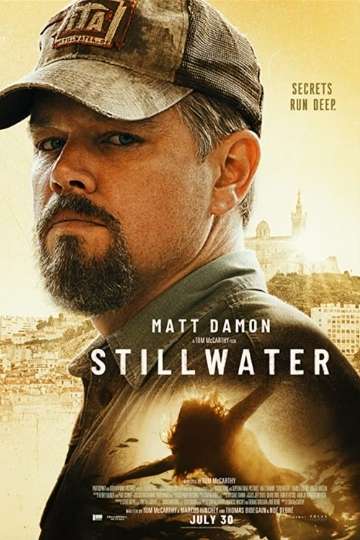 Fancy watching 'Stillwater' in the comfort of your own home? Hunting down a streaming service to buy, rent, download, or view the Tom McCarthy-directed movie via subscription can be a challenge, so we here at Moviefone want to take the pressure off.

We've listed a number of streaming and cable services - including rental, purchase, and subscription options - along with the availability of 'Stillwater' on each platform. Now, before we get into all the details of how you can watch 'Stillwater' right now, here are some details about the Anonymous Content, Slow Pony Pictures, DreamWorks Pictures, Participant, 3dot Productions, Amblin Partners, Focus Features drama flick.

Released July 30th, 2021, 'Stillwater' stars Matt Damon, Abigail Breslin, Camille Cottin, Lilou Siauvaud The R movie has a runtime of about 2 hr 19 min, and received a user score of 70 (out of 100) on TMDb, which compiled reviews from 365 top users.

You probably already know what the movie's about, but just in case... Here's the plot: "Bill Baker, an American oil-rig roughneck from Oklahoma, travels to Marseille to visit his estranged daughter, Allison, who is in prison for a murder she claims she did not commit. Confronted with language barriers, cultural differences, and a complicated legal system, Bill builds a new life for himself in France as he makes it his personal mission to exonerate his daughter."

No Man of God
The complicated relationship that formed between the FBI analyst Bill...

The Summit of the Gods
Did George Mallory die going up or coming down the summit of Everest,...

Candyman
Anthony and his partner move into a loft in the now gentrified Cabrini...

Beckett
While vacationing in Greece, Beckett, becomes the target of a manhunt...

Reminiscence
Nicolas Bannister, a rugged and solitary veteran living in a near-futu...

Don't Breathe 2
The Blind Man has been hiding out for several years in an isolated cab...