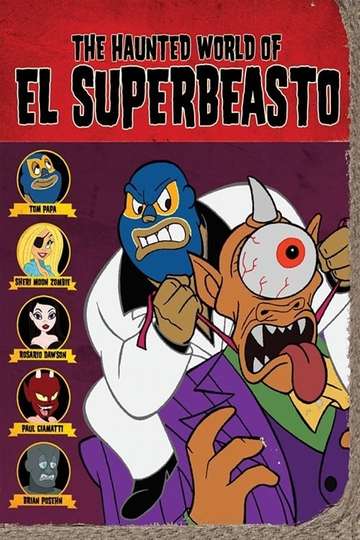 The Haunted World of El Superbeasto (2009)

TMDb Score
60
R 1 hr 17 minSep 12th, 2009Action, Animation, Comedy, Horror
The Haunted World of El Superbeasto is an animated comedy that also combines elements of a horror and thriller film. It is based upon the comic book series created by Rob Zombie that follows the character of El Superbeasto and his sexy sidekick sister, Suzi-X, voiced by Sheri Moon, as they confront an evil villain by the name of Dr. Satan.
Show More
DirectorRob Zombie
StarringRosario DawsonKaren StrassmanSheri Moon Zombie
Movie DetailsWhere to WatchFull Cast & CrewNewsBuy DVD

Rosario Dawson Signs on for 'Zombieland 2'

House of 1000 Corpses
Two teenage couples traveling across the backwoods of Texas searching...

31
Five carnival workers are kidnapped and held hostage in an abandoned,...

Resident Evil
When a virus leaks from a top-secret facility, turning all resident re...

A Serious Man
It is 1967, and Larry Gopnik, a physics professor at a quiet Midwester...

Spider-Man 2
Peter Parker is going through a major identity crisis. Burned out from...

Batman
Batman must face his most ruthless nemesis when a deformed madman call...