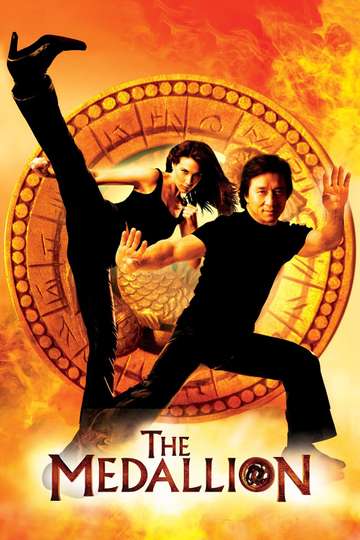 The Medallion (2003)Stream and Watch Online

Want to watch 'The Medallion' on your TV or mobile device at home? Finding a streaming service to buy, rent, download, or view the Gordon Chan-directed movie via subscription can be difficult, so we here at Moviefone want to help you out.

Read on for a listing of streaming and cable services - including rental, purchase, and subscription choices - along with the availability of 'The Medallion' on each platform when they are available. Now, before we get into the various whats and wheres of how you can watch 'The Medallion' right now, here are some details about the Living Films, Emperor Multimedia Group (EMG), Golden Port Productions Ltd. comedy flick.

Released August 15th, 2003, 'The Medallion' stars Jackie Chan, Lee Evans, Claire Forlani, Julian Sands The PG-13 movie has a runtime of about 1 hr 28 min, and received a user score of 56 (out of 100) on TMDb, which put together reviews from 872 knowledgeable users.

You probably already know what the movie's about, but just in case... Here's the plot: "A Hong Kong detective suffers a fatal accident involving a mysterious medallion and is transformed into an immortal warrior with superhuman powers."

First Strike
"They thought they possessed the ultimate weapon. They hadn't counted on Jackie Chan."

The Tuxedo
"Suit up for action!"
Project A: Part II
"This A Is For Action!"
Rush Hour 2
"Get ready for a second Rush!"
Mr. Nice Guy
"Fight first. Apologize later."
Police Story 2
"Jackie Chan escalates his one-man war on crime."
Shanghai Noon
"The old west meets the far east."
Thunderbolt
"The stakes don't come much higher"
Operation Condor
"On his most dangerous mission ever, the world's toughest secret agent isn't going in alone."
Gorgeous
Twin Dragons
"Twice the action!"
Shanghai Knights
"A Royal Kick In The Arse."

The Spy Next Door
"Spying is easy, Babysitting is hard."
Rumble in the Bronx
"No Fear. No Stuntman. No Equal."
Robin-B-Hood
"This September! Crawl Baby crawl!"
The Legend of Drunken Master
"He's got a secret weapon with a lot of kick."
City Hunter
"He's out of town, out of time and out of his depth!"
Who Am I?
"Fight now. Ask questions later."

The Forbidden Kingdom
"The battle for eternity is the fantasy of a lifetime."
Police Story 3: Super Cop
"There's never a cop around when you need one, but when this cop's around, all you need is one."
The Accidental Spy
"Ordinary Guy, Extraordinary Spy."