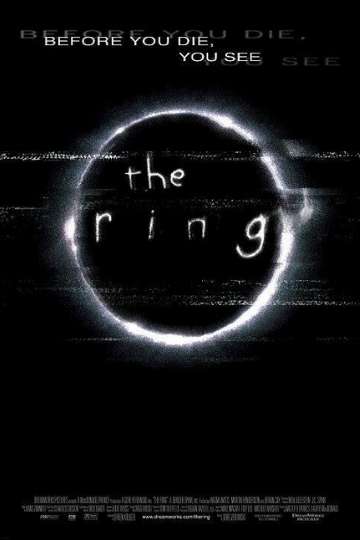 The Ring (2002)Stream and Watch Online

Want to watch 'The Ring' on your TV or mobile device at home? Searching for a streaming service to buy, rent, download, or watch the Gore Verbinski-directed movie via subscription can be a huge pain, so we here at Moviefone want to do the heavy lifting.

Below, you'll find a number of top-tier streaming and cable services - including rental, purchase, and subscription options - along with the availability of 'The Ring' on each platform when they are available. Now, before we get into the nitty-gritty of how you can watch 'The Ring' right now, here are some specifics about the DreamWorks Pictures, BenderSpink, Parkes+MacDonald Image Nation mystery flick.

Want to know what the movie's about? Here's the plot: "Rachel Keller is a journalist investigating a videotape that may have killed four teenagers. There is an urban legend about this tape: the viewer will die seven days after watching it. Rachel tracks down the video... and watches it. Now she has just seven days to unravel the mystery of the Ring so she can save herself and her son."

Saw
"Live or die. Make your choice."
Final Destination
"No accidents. No coincidences. No escapes."

The Blair Witch Project
"Everything you've heard is true."
Boogeyman 2
"Fear. In The Flesh."

The Exorcism of Emily Rose
Boogeyman
"You thought it was just a story."
Insidious
"It's not the House that's Haunted."

Silent Hill
"Once you enter Silent Hill, there is no turning back."
Boogeyman 3
Scary Movie
"No mercy. No shame. No sequel."
Blame
"Who can you blame if you're the only one left?"
Jeepers Creepers
"Jeepers Creepers"
Proyecto Aiden
Final Destination 2
"Death is like a boomerang. it keeps coming back."

Paranormal Activity
"What Happens When You Sleep?"