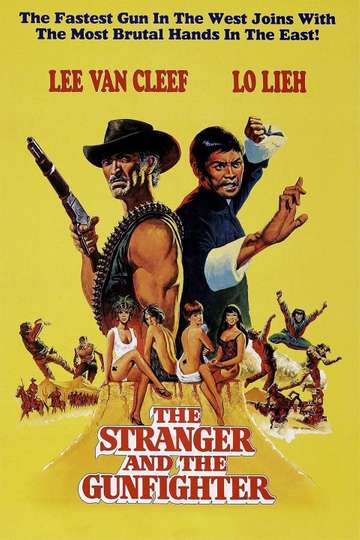 The Stranger and the Gunfighter (1976)

"The fastest gun in the West joins with the most brutal hands in the East!"
TMDb Score
53
NR 1 hr 47 minApr 1st, 1976Western, Action
During a hold-up in the Wild West, Dakota kills a rich old Chinese man, Wang. Later, he is captured, sentenced, and is about to be hanged - and he never profitted from Wang's death, has he buried him with the photographs of his four widows, and a few worthless papers. Meanwhile, Ho comes to America in search of his uncle's fortune, and must get Dakota free, as he his the only man who can lead him to Wang's tomb. They open the tomb, retaking the pictures of Wang's widows. It happens he reads the papers and knows that Wang had one quarter of a map tattooed in each of his women's buttocks. Now, the difficult part will really start... Treasure hunt.
Show More
DirectorAntonio Margheriti
StarringLee Van CleefLo LiehPatty Shepard
Movie DetailsWhere to WatchFull Cast & Crew