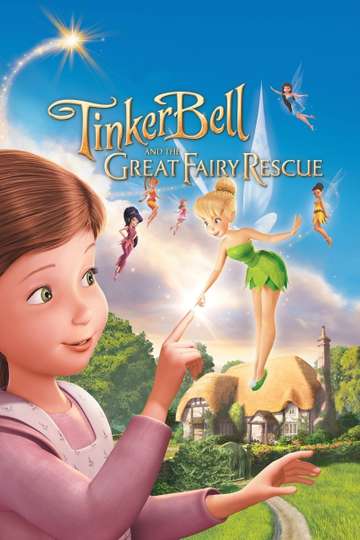 Need to watch 'Tinker Bell and the Great Fairy Rescue' on your TV, phone, or tablet? Discovering a streaming service to buy, rent, download, or view the Bradley Raymond-directed movie via subscription can be confusing, so we here at Moviefone want to help you out.

Read on for a listing of streaming and cable services - including rental, purchase, and subscription choices - along with the availability of 'Tinker Bell and the Great Fairy Rescue' on each platform. Now, before we get into the fundamentals of how you can watch 'Tinker Bell and the Great Fairy Rescue' right now, here are some particulars about the DisneyToon Studios, Prana Animation Studios fantasy flick.

Released September 21st, 2010, 'Tinker Bell and the Great Fairy Rescue' stars Mae Whitman, Michael Sheen, Pamela Adlon, Lucy Liu The G movie has a runtime of about 1 hr 16 min, and received a user score of 67 (out of 100) on TMDb, which compiled reviews from 679 top users.

Want to know what the movie's about? Here's the plot: "During a summer stay on the mainland, Tinker Bell is accidentally discovered while investigating a little girl's fairy house. As the other fairies, led by the brash Vidia, launch a daring rescue in the middle of a fierce storm, Tink develops a special bond with the lonely, little girl."

Movies Like Tinker Bell and the Great Fairy Rescue

Tangled Ever After
The kingdom is in a festive mood as everyone gathers for the royal wed...

Secret of the Wings
Tinkerbell wanders into the forbidden Winter woods and meets Periwinkl...

The Princess and the Frog
A waitress, desperate to fulfill her dreams as a restaurant owner, is...

Barbie Fairytopia: Magic of the Rainbow
Elina goes to a fairy school to learn dancing and fairy magic. The spr...

Pixie Hollow Bake Off
Tink challenges Gelata to see who can bake the best cake for the queen...

Barbie and the Three Musketeers
Corinne (Barbie) is a young country girl who heads to Paris to pursue...

Pixie Hollow Games
Rosetta and new arrival Chloe band together to try to break the garden...

Netflix's 'Apostle' Trailer Is So Damn Good, But Hell for Dan Stevens