Apr 6, 2021 - When a squad of Russian soldiers kills his family in retaliation for his role in a top-secret op, Sr. Chief John Kelly (Michael B. Jordan) pursues the assassins at all costs. Joining forces with a fellow SEAL (Jodie Turner-Smith) and a shadowy CIA agent (Jamie Bell), Kelly’s mission unwittingly exposes a covert plot that threatens to engulf the U.S. and Russia in an all-out war. Torn between personal honor and loyalty to his country, Kelly must fight his enemies without remorse if he hopes to avert disaster and reveal the powerful figures behind the conspiracy. 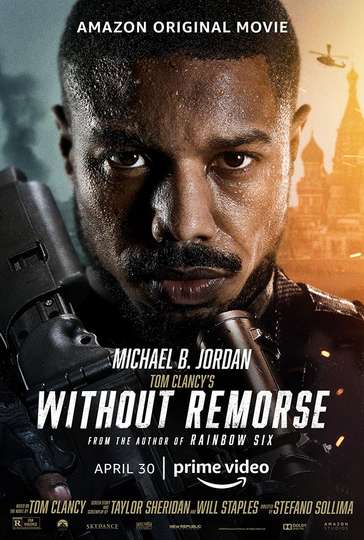 42s
'Tom Clancy's Without Remorse' Clip: It's a Girl

1:07
'Tom Clancy's Without Remorse' Clip: More of a Badass

Those Who Wish Me Dead
"Nature finds a way."
Fourth Grade

Mortal Kombat
"Get over here."
At the Horizon
Little Palestine, Diary Of A Siege
Stranger

Oxygen
"No escape. No memory. 90 min to live."
Tom and Jerry: The Lost Dragon

The Virtuoso
"Every betrayal begins with trust."
Tom Medina

Stowaway
"Millions of miles from home, survival comes with sacrifice."

The Tomorrow War
"The fight for tomorrow begins today."
To the Sea

‘I Am Legend’ Sequel in the Works