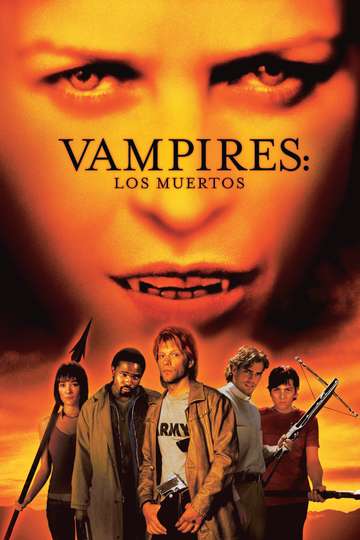 Fancy watching 'Vampires: Los Muertos' on your TV or mobile device at home? Tracking down a streaming service to buy, rent, download, or view the Tommy Lee Wallace-directed movie via subscription can be a challenge, so we here at Moviefone want to help you out.

Below, you'll find a number of top-tier streaming and cable services - including rental, purchase, and subscription alternatives - along with the availability of 'Vampires: Los Muertos' on each platform when they are available. Now, before we get into the nitty-gritty of how you can watch 'Vampires: Los Muertos' right now, here are some finer points about the Screen Gems, Storm King Productions action flick.

Released September 24th, 2002, 'Vampires: Los Muertos' stars Jon Bon Jovi, Cristián de la Fuente, Diego Luna, Natasha Gregson Wagner The R movie has a runtime of about 1 hr 33 min, and received a user score of 54 (out of 100) on TMDb, which put together reviews from 179 knowledgeable users.

Want to know what the movie's about? Here's the plot: "Tough-as-nails vampire hunter Derek Bliss is on the hunt for "suckers" in the heart of Mexico when he receives a new assignment from a mysterious client. Thrown together with a group of slayers, including sexy Zooey, who may or may not be one of the undead. Derek and company are up against a growing number of fast-moving, bloodthirsty vampires and their elusive and powerful leader."

Vampires
"From the master of terror comes a new breed of evil."