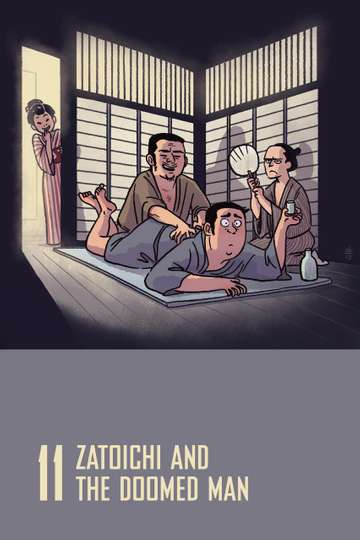 Zatoichi and the Doomed Man (1965)Stream and Watch Online

Want to behold the glory that is 'Zatoichi and the Doomed Man' in the comfort of your own home? Discovering a streaming service to buy, rent, download, or watch the Kazuo Mori-directed movie via subscription can be challenging, so we here at Moviefone want to do the work for you.

We've listed a number of streaming and cable services - including rental, purchase, and subscription alternatives - along with the availability of 'Zatoichi and the Doomed Man' on each platform when they are available. Now, before we get into the nitty-gritty of how you can watch 'Zatoichi and the Doomed Man' right now, here are some finer points about the Daiei Film action flick.

Released September 18th, 1965, 'Zatoichi and the Doomed Man' stars Shintarō Katsu, Kanbi Fujiyama, Kenjirō Ishiyama, Masako Akeboshi The movie has a runtime of about 1 hr 17 min, and received a user score of 69 (out of 100) on TMDb, which compiled reviews from 26 experienced users.

Curious to know what the movie's about? Here's the plot: "Blind swordsman Zatoichi, jailed briefly, is implored by another prisoner to aid him in proving his innocence of a crime for which he is sentenced to death. Zatoichi is reluctant to get involved, because he knows how often such involvement has led to trouble in the past. But events conspire to thrust him repeatedly into involvement, and gradually he comes to believe in the man's innocence and determines to free him."

'Zatoichi and the Doomed Man' is currently available to rent, purchase, or stream via subscription on Apple iTunes, Criterion Channel, and Amazon Video .