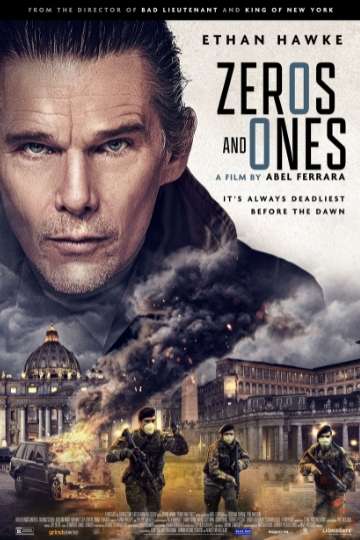 Zeros and Ones (2021)Stream and Watch Online

Yearning to watch 'Zeros and Ones' in the comfort of your own home? Hunting down a streaming service to buy, rent, download, or watch the Abel Ferrara-directed movie via subscription can be tricky, so we here at Moviefone want to do the heavy lifting.

Read on for a listing of streaming and cable services - including rental, purchase, and subscription choices - along with the availability of 'Zeros and Ones' on each platform when they are available. Now, before we get into the fundamentals of how you can watch 'Zeros and Ones' right now, here are some particulars about the Macaia Film, Hammerstone Studios, Almost Never Films, Maze Pictures, Rimsky Productions mystery flick.

Released November 19th, 2021, 'Zeros and Ones' stars Ethan Hawke, Cristina Chiriac, Phil Neilson, Valerio Mastandrea The R movie has a runtime of about 1 hr 25 min, and received a user score of 50 (out of 100) on TMDb, which assembled reviews from 178 well-known users.

Want to know what the movie's about? Here's the plot: "Ethan Hawke (Training Day) and director Abel Ferrara (Bad Lieutenant) join forces for this gritty, tense political-thriller set on one deadly night in Rome. Called to the city to stop an imminent terrorist bombing, soldier J.J. (Hawke) desperately seeks news of his imprisoned rebel brother, Justin (also Hawke), who holds knowledge that could thwart the attack. Navigating the capital’s darkened streets, J.J. races to a series of ominous encounters, hoping to keep the Vatican from being blown to bits."

'Zeros and Ones' Release Dates

The Unbearable Weight of Massive Talent
"Nicolas Cage is Nick Cage."
Day Shift
This Much I Know to Be True

Cry Macho
"A story of being lost... and found."

No Time to Die
"The mission that changes everything begins…"

We Own the Night
"Two brothers on opposite sides of the law. Beyond their differences lies loyalty."